Do The Jews Own Hollywood And The Media? By Texe Marrs

Do The Jews Own Hollywood And The Media?

Do the Zionist Jews own Hollywood and the media? Are they using the media to mold and shape American opinion by constantly injecting Zionist propaganda and bias into news programs, movies, television shows, even children’s cartoons and entertainment?

The answer is so blatantly “Yes!” that you wouldn’t think these questions are even worth pursuing. But recently, the untoward comments of a patriot talk show host made me stop and rethink it. Are there people out there-even in the Patriot Movement-who really are that much in the dark, who deny Jewish influence in the media?

Recently, when a caller to a talk show on the Genesis Radio Network suggested that the Jews control the media, the host went wild. He raged on and on, playing the race card. He branded the surprised caller and others like him who are weary of Zionist influence “Nazis” and “anti-Semites.” Angrily, he denied Jewish involvement in any conspiracies and ridiculed those who had the audacity to suggest that Jews run Hollywood or the media. Then, in a real fit of spewed venom, the talk show host demanded that the caller and all others who believe like him should go out and hang themselves to promote population reduction.

As if that wasn’t hateful enough, the pro-Zionist host then stated that all the “Nazis and Anti-Semites” who opposed Zionism and the Jews should plug in an electric toaster, hold it to their naked bodies, jump into a bathtub filled with water, and have a party.” In other words, kill themselves.

Quite a rampage by the supposedly “patriot” talk show host. And all because the poor caller had dared to propose undue Jewish influence over the media.

Hearing the actual taped broadcast of this unbelievable tirade by a pro-Zionist advocate confirmed my resolve to inform good folks once again of the truly dictatorial grip that Zionist Jews have on the media. The best way to do this is not to rage and spew venom, but simply to present the facts, to document the truth of Jewish control of the media.

What Do Knowledgeable Jews Say?

How about going to top Jews in the media themselves and see what they say? Take Joel Stein, for example, columnist for the Los Angeles Times newspaper and regular contributor to Time magazine. In his column in the LA Times (Dec. 19, 2008), Stein says that Americans who think the Jews do not control Hollywood and the media are just plain “dumb.” 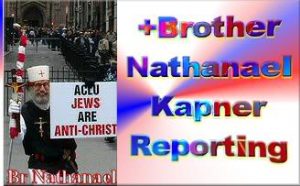 That’s just the top brass at the studios. Then there are the actors and entertainers-predominantly Jews, from Barbara Streisand and Gwyneth Paltrow to Tom Hanks and Ben Afleck. JewJewand Jew again. As Stein wryly remarks, even the head of the Actors’ Union, the Screen Actors Guild, Alan Rosenberg, is a Jew.

“The Jews are so dominant,” writes Stein, “I had to scour the trades to come up with six Gentiles in high positions at entertainment companies.” “But lo and behold,” Stein says, “even one of that six, AMC President Charles Collier, turned out to be a Jew!”

“As a proud Jew,” says Joel Stein, “I want America to know of our accomplishment. Yes, we control Hollywood.”

Stein says he then called Abe Foxman, Chairman of the Jewish ADL, to ask him, why don’t more Jews just come out and boast at this great accomplishment? Foxman responded by admitting that yes, it’s true that most of the top execs “happen to be Jewish.” In fact, Foxman told Stein, “all eight major film studios are run by men who happen to be Jewish.”

Ben Stein (no relation to Joel), the well-known Jewish actor, economic commentator and writer, when asked “Do Jews run Hollywood?” stared blankly at the questioner, then retorted, “You bet they do-and what of it?” Shahar Ilan, writing in www.haaretz.com, the internet division of Israel’s top daily newspaper, commented, “The Jews do control the American media. This is very clear, and claiming otherwise is an insult to common knowledge.”

Neal Gabler, also a Jew and a noted media researcher, wrote an entire book outlining Jewish control of Hollywood. It was entitled, An Empire of Their Own: How the Jews Invented Hollywood. But to really see how the Jews, in their own publications and press, view the reality of Jewish control of the media, all one has to do is take a look at a recent issue of the Jewish Daily Forward, which featured an article entitled, “Billionaire Boychiks Battle for Media Empire.”

This fascinating, look-see article discussed how the Jews had for decades owned the media and now were competing; that is, vying, to buy one of America’s most powerful media companies, Tribune Company, which owns 23 television stations, a baseball team, and many major newspapers, including the Chicago Tribune and the Los Angeles Times.

“However, it turns out,” gloated the Jewish mag, “we’ll have a Jew in charge of the (LA) Times, which was once one of old Los Angeles’ most famous WASP (White Anglo Saxon Protestant) institutions. What a great day for old LA Jews”

The publication noted that among the Jewish billionaires (“boychiks”) vying for the Tribune media empire is “Liberal, Jewish, media mogul David Geffen.”

And who, pray tell, is the current owner of the Tribune Company? Why, that would be Jewish billionaire Sam Zell. Zell is a major donor to Israeli, Zionist and Jewish causes. His own rabbi proudly reports that Zell is “a committed Zionist, a generous supporter of Israel, and a member in good standing of the synagogue.”

Asked who his own favorite newspaper columnists were, Zell quickly answered, “Charles Krauthammer, Thomas Friedman, and David Brooks.” Surprise! The trio are all ardent Zionist whack-jobs who clamor over each other demanding the U.S. attack Iran, provide billions more in foreign aid to favored nation Israel, and so forth.

So powerful is the Jewish control over the media that Nathanael Kapner, a rare Jew who converted to Christianity and now is adept at reporting these things, asserts that no longer can we trust our local daily newspaper. “Zionist Jews have taken over the ‘local newspaper’ in America,” Kapner writes. Indeed he explains that there basically is no local newspaper anymore, because, “Most local newspapers are owned by companies controlled by Zionists whose offices are hundreds of miles away.”

Kapner provides manifold evidence of Zionists’ dominating control of the media at all levels. The Newhouse Empire of the Jewish brothers Samuel, Donald, and Theodore Newhouse, Kapner says, “illustrates the insatiable appetite for opinion control:”

“Today, the Newhouse Empire owns 40 local newspapers across the U.S.A. These include the Newark Star Ledger, the Cleveland Plain Dealer, the Portland Oregonian, and the St. Louis Globe-Democrat.”

Then, there are the vast array of magazines run by the Jewish Newhouse family-including the New Yorker, Vogue, Golf Digest, Glamour, Gentleman’s Quarterly (GQ), and the massively circulated newspaper insert, Parade magazine.

The fact that Zionists control virtually every media outlet in America is no doubt why the American citizenry hears only one version of events in the Middle East-the pro-Jew, pro-Israeli side. This led Dr. Kevin MacDonald, professor at California State University, to write:

“In the contemporary world, organized American Jewish lobbying groups and deeply committed Jews in the media are behind the pro-Israel U.S. foreign policy that is leading to war against virtually the entire Arab world.”

This Zionist bias and propaganda spin by the Jewish-owned American media is not new. As far back as 1978, the noted Jewish political writer Alfred Lillienthal, in his revealing book, The Zionist Connection, stated:

“The most effective component of Jewish connection is probably that of media control. It is well known that American opinion molders have long been largely influenced by a handful of powerful newspapers, including the New York Times, the Washington Post, and the St. Louis-Post Dispatch (All Jewish Families).”

To further illustrate the breadth of Jewish media control, we note that Jewish magnate Arthur Sulzberger’s media empire today includes not only the New York Times (which, in Stalin’s day, systematically covered up the genocidal crimes of Jewish commissars in Communist U.S.S.R), but also the Boston Globe, the Lexington Dispatch (NC), the Gainesville Sun (FL), the Ocala Star Banner (FL), the Tuscaloosa News (AL), the Spartansburg Herald Journal (SC), and the Santa Barbara News Press (CA). Each of the newspapers Lillienthal mentioned back in 1978, in turn, owned and still owns dozens of others. So tainted is the news because of this that almost every newspaper in America endorsed President George Bush’s radically pro-Israel policies in the Middle East, including Israel’s savage butchery of Lebanon and Palestine.

There can be no doubt. It is easy for us to document the massive dominance over the media by evil Jewish shills who are continually hostile to pure American interests while, everyday, unabashedly spewing out reams of misleading Zionist propaganda. Time magazine, Newsweek, NBC, ABC, CBS, CNN, FOX-and many, many more are all owned or run by Jews and operated solely to further the aims of the traitorous, anti-American, ever-growing Zionist World Empire.

All America is in the Grip of the Hidden, Red Iron Fist of Zionism

Of course, the media, even as important as it is to our culture, is only a bit piece of the whole that is now, regrettably, under the big thumbs of the Jewish Zionist elite. Our educational establishment, Wall Street, the banks, the Federal Reserve, our Congress, the White House (just consider Rahm Emanuel, the Zionist Israeli freak who is Obama’s White House Chief of Staff), and our judiciary-each and every one is infiltrated by Zionist radicals who put Israel and their own “Chosen People” first, to the detriment of everything sacred to honest, God-fearing, hard-working Americans.

So, the next time you hear some ignorant rube on talk radio or elsewhere shoving the race card in your face and ranting and raving about “Nazis” and “anti-Semites” who “claim” the Jews control the media, why don’t you just reach out and turn that radio dial to another place. And please, don’t forget to also let the radio network and station manager know of your displeasure.

The fact is that the dishonest Zionist shills out there promoting Zionist lies, drivel, and nonsense truly deserve our contempt.

The Truth is Precious

As for Texe Marrs and Power of Prophecy, we have long pledged ourselves to telling you the truth, the whole truth, and nothing but the truth. And part of that truth, simply put, is this: That yes, absolutely, Zionist Jews do own and control Hollywood and the media. So beware of their lies and deceit. The truth is precious. Let us work together to protect and nurture it.