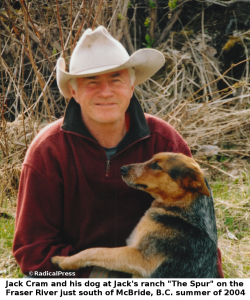 Renate Andres-Auger was a Cree woman lawyer, called to the bar in 1989 who then opened a practice in Vancouver. At that time, Jack Cram was a respected Vancouver lawyer with much knowledge of real estate law and 25 years of experience. Connect the dots. Chronology cannot be strictly adhered to because of the mass of information.

Chief Justice McEachern used to be a member of a particular law firm. A court case arose that lasted 374 days in the Supreme Court, involving the Gitzan Wet’suwet’en Hereditary Chiefs in land claims. The lawyers for the Chiefs were from the same law firm as McEachern used to be with. These lawyers sold out their clients by agreeing that the territory involved did not belong to the natives, but to the Crown, from the time that the British claimed a colony there! Did the lawyers ask for a different judge? Did McEachern disqualify himself? Need you ask?

Auger continued to be outspoken about this case. In December 1992 the Law Society suspended her right to practice law, without notice and without a hearing, supposedly because her account books were not in order. She complied with all its demands, paid all the imposed fees and penalties, but she was not reinstated. Cram, her lawyer, came into the picture when Auger named a large group of judges and lawyers in her writ of summons, alleging that they had conspired to destroy her law practice and her reputation, to cover up corruption in the form of influence-peddling within the judicial system.

But consider: Cram had previously made a statement that if the truth be known, aboriginals do indubitably own 95% of the province of BC.

Let us go back aways, to the case of a Dr. Gossage, who had been accused of child pornography and sexual assault, indulged in during his practice of medicine. Not only was this man allowed to continue his practice whilst investigation was supposed to be going on, but a lawyer called Peter Leask was appointed as special prosecutor. Leask “managed” to “persuade” the judge to impose a gag order – not only on the allegations but also on the gag order itself!

Then let us move to the case of Mr. Benest, the Burnaby elementary school principal accused of using his pupils for pornographic purposes. Lo and behold, who was the counsel for Benest who succeeded in using delaying and obfuscation tactics to get his client no more than a slap on the wrist? Why, none other than Peter Leask!

And then we come to the grandparents of one child victim in the Gossage case, who hired Cram to represent them in their civil suit against Gossage. They decided to picket Gossage’s office to warn other parents, since the judicial system saw fit to let Gossage continue practicing. Suddenly, more facts came to light. At least 30 people contacted Doug Stead, one of the grandparents, some from as far away as Ontario. None of them knew each other. And yet they all told similar stories. A suspicion emerged that Gossage was abusing kids in provincial care, which had to involve collusion. Cram’s office was besieged with people giving information. He claimed that he was given pictures of teenage boys “in the company of” judges and evidence that children were taken from reserves and delivered to the Vancouver Club, never to be seen again.

Slide in time to the public statement of Harriet Nahanee, who saw a limousine arrive on her reserve and children with make-up applied being driven away, never to return.

Search your memory for MP Hedy Fry referring on tv to a Canada-wide pedophile ring.

Cram began to air what he knew publicly. He was interviewed by Georgia Straight and on Rafe Mair’s show, among others. He was warned by Dr. Wayne Poley at a meeting that something bad would happen to him because of his pursuit of the horrible facts he had uncovered.

So, if we accept the facts so far, we have Cram acting for Auger and possessing all this damning information, not only about judicial corruption but pedophiles in high places within the judicial system.

Sure enough, not only was Auger deprived of her practice but Cram’s practice also came under attack. In April 1994 Cram sued on the same grounds as Auger had: that named people conspired to deprive him of the practice of law. At the hearing, the police were present with a machine gun! And guess who was Cram’s opponent, acting for the Law Society? Why, none other than our old friend, Peter Leask!

But appearing for Auger at her hearing, also in April, 1994, the court setting was grim. Sheriffs were present in numbers, not usual for civil cases. The plot was to present Cram as suffering from overwork and a drinking problem. Auger was sitting with Cram and without going into details of the set-up suffice it to say that the judge refused to listen to Cram, eventually finding him in contempt and telling him he needed counsel. Cram appointed Auger. She continued to ask the judge to say who had provided him with certain material to read before he heard the case, and to disqualify himself. Very quickly she was grabbed by four sheriffs, handcuffed and dragged to jail. The judge ordered Cram back to the counsel table – at this point Cram had moved to the gallery and was surrounded by friends. Cram refused.

By this time there were over forty sheriffs in the courtroom. The judge ordered them to arrest Cram and many of them wrestled him to the ground, hauling him off to jail too. But a lawyer friend intervened and got Cram released, but only to attend another hearing for the contempt charge. Jack was hauled into the room face down by several sheriffs, then spreadeagled and held down, one sheriff holding him by the throat. The judge apparently relented enough to allow Jack to make his case and by 4 pm that afternoon Cram had laid before Mr. Justice Callaghan details of a coverup by the head officers of the Law Society and by Judges to aid and abet a pedophile and also their allowing a lawyer to continue to practice who had been convicted of heroin possession for trafficking purposes, together with conspiring to destroy both his and Auger’s right to practice law.

Adjournment was declared at 4 pm. Cram had not finished his evidence. That night Cram appeared on another radio show to talk about what he had discovered. Just after midnight on arriving home, Cram was attacked by ten police officers and his hands and feet shackled. He was neither read his rights or even informed what the assault was about. Why was an ambulance waiting? Cram was hustled into the ambulance and he believed he was drugged, as he does not remember arriving anywhere, but was detained against his will in the Psychiatric ward at Vancouver General Hospital for a week, during which time he was forcibly injected with a drug or drugs. He was in and out of drug-induced sleep. All attempts by friends and lawyers to contact him were refused.

The “committal” was authorized by two doctors who had just happened (what a coincidence!) to be sitting in the courtroom and had declared on the certificates that they had examined Cram! Now it’s committal by remote control!

Cram was released on May 2nd. While he had been detained and drugged the Law Society had obtained a judicial order appointing two lawyers as custodians of his practice and its property. A witness watching Cram’s office building saw people holding pictures and negatives up to the light in his office window. Note that the order was signed by Mr. Justice Bruce MacDonald, the same judge who had ordered the arrest of Renate Andres-Auger!

Auger managed to escape during this period and has not been heard of since. Jack Cram has also dropped out of the picture and is now ranching in the interior of the province and refuses to discuss the issue any longer.