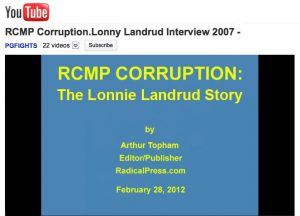 The following set of short video interviews with Lonnie Landrud of Quesnel, British Columbia, Canada reveal the exposed cover up by the RCMP, the mainstream media and the judiciary of an exposed crime of murder committed by two RCMP officers back in 1999 and witnessed by Mr. Lonnie Landrud. A young missing woman along the notorious “Highway of Tears” was murdered in a wooded area of West Quesnel and when Mr. Landrud reported the crime to the RCMP they in turn attempted to kill him in order to cover up what he had unintentionally witnessed.

Please click on the link directly below to view these controversial and disturbing videos.