The megalomania of the Zionist Jews: Robert Faurisson found “guilty of racial defamation for 2006 Tehran talk” 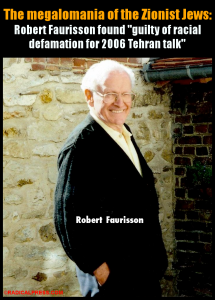 On June 21, 2016 Professor Robert Faurisson was prosecuted, with regard to his 2006 talk in Tehran and his paper “The Victories of Revisionism” , for “disputing the existence of crimes against humanity”, and, because of his 60-word sentence alone, for “racial defamation”.
Here is the result of that trial as conveyed to us [Bocage] by the Professor’s barrister:
“On September 27, 2016, in the case of the talk given by Robert Faurisson in Tehran in 2006, the 17th chamber of the Paris correctional court ruled as follows:
Two charges of disputing the existence of crimes against humanity were declared null.
The third charge, that of racial defamation for the sentence of approximately 60 words [included in his talk], resulted in Robert Faurisson’s conviction and sentence to four months’ imprisonment (suspended) along with a fine of €4,000. The LICRA [Ligue internationale contre le racisme et l’antisémitisme], plaintiff, obtained €3,000 in damages and €2,000 in legal costs. Thus, a judgment totalling €9,000.
Professor Faurisson immediately lodged an appeal against this decision.
Tomorrow, September 28, at 1.30 pm, Robert Faurisson will appear again before the same court for having spoken about the Nazi gas chambers on the website Meta TV