The Seven Pillars Of Zionist Subterfuge by Arthur Topham 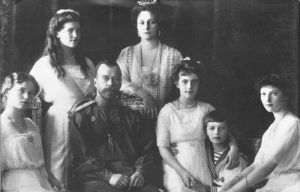 Tzar Nicholas II and his family. The Tzar acted constitutionally and abdicated on March 5, 1917. He and his family were kept prisoner at Tobolsk and guarded by a Russian commandant and Russian guards. In April, 1918, after the Jewish regime gained controlled, he was transferred along with his family from Moscow to Ekaterinburg in the Urals. All the Russians were replaced by Bolshevik Jew Cheka members who, at midnight on July 16, 1918, woke the Tzar and his family and took them into the basement and shot and bayoneted them and then took the bodies to a disused iron pit and and cut them up and burned them and then dissolved the parts with 400 lbs of sulphuric acid. Afterwards the ashes and fragments were thrown down a mine shaft and covered up. Thanks to the fact that the White Armies captured Ekaterinburg the truth was found out.

The Seven Pillars of Zionist Subterfuge
by Arthur Topham

The struggle for freedom of speech in Canada continues. It’s has now been over 19 months since the Zionist organization nominally referred to as B’nai Brith Canada registered a formal complaint with the Canadian Human Rights Commission, the premise of which was the contention that I and my website RadicalPress.com were contriving to promote ongoing hatred affecting persons identifiable as Jews and/or as citizens of Israel.

Since that day back on November 20, 2007 it has been a continuous gong show of legal assaults in one form or another directed toward myself; first coming from the Commission and then, after they decided the case warranted proceeding to the next stage, from the Canadian Human Rights Tribunal, all seemingly in tandem with the Complainants’ own submissions.

Whenever I submit a document or letter or make a motion in my own defense the immediate reaction is to be met with counter arguments and legalese from either Mr. Daniel Poulin, counsel for the Commission or Marvin Kurz, of the law offices of Dale, Streiman & Kurz of Brampton, Ontario. Kurz of course is a longstanding member of this Rothschild created secret society known as the Independent Order of B’nai Brith and is also head counsel for the Canadian branch of B’nai Brith International better known to the public as simply B’nai Brith Canada. Kurz is representing the two B’nai Brith Canada executive members, Mr. Nobody and Anita Bromberg, who laid the complaint against me and my website.

As is standard practice with the Zionists, whenever it comes to attempts to silence dissenting opinions, they do their damnedest to discredit whomever they are out to censor. In my case they attempt to do it via legal channels and throwing every bit of muddy legal “precedent” that they can dig up at both me and the (theoretically independent) Tribunal in order to get the Tribunal to rule on inapplicable case law that would prevent me from presenting the overwhelming evidence which now exists that refutes all of their worn-out allegations of “anti-Semitism” and “racism” and “hate-monger” and which also conclusively shows that Israel is, in fact, a racist, terrorist, apartheid state and likely the most undemocratic nation in the world of those who profess to be such.

As such their latest attempt to have the Tribunal lend its quasi-judicial ear to the seven points contained within their June 23, 2009 letter to the Tribunal represents in some ways an indication of their desperation in trying to stop the flow of information that counters all of their propaganda concerning both political Zionism and the actual politics of the state of Israel.

Employing the legal procedure known as “Judicial Notice” which Black’s Law Dictionary defines as, “The act by which a court, in conducting a trial, or framing its decision, will, of its own motion, and without the production of evidence, recognize the existence and truth of certain facts, having a bearing on the controversy at bar, which, from their nature, are not properly the subject of testimony, or which are universally regarded as established by common notoriety, e.g., the laws of the state, international law, historical events, the constitution and course of nature, main geographical features, etc.” the Complainants are attempting to convince the Tribunal that all of their standard Zionist propaganda which has been forced upon the general public over the past century by a compliant, controlled Zionist media, must now be recognized as being universally accepted as fact.

As far as chutzpah goes this latest move on their part has to be considered as one of the more blatant examples of arrogance and chauvinism to ever have been offered up for public consumption.

The substance of the article below is therefore my (relatively) short response to the seven points they have submitted to the Tribunal. Bear in mind as well that the whole issue of section 13 of the Canadian Human Rights Act is, in essence, tied directly to this latest ploy by the Zionists. In keeping with a semblance of literary flavour in all of these otherwise dry and dusty proceedings I’ve chosen to refer to the seven points as the seven pillars of Zionist subterfuge.

The remainder of this article is being edited and will be reposted at some, as yet, undetermined time. Ed.