Did He Who Made the Lamb Make Section 13? by Arthur Topham 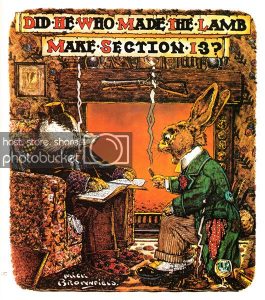 Did He Who Made the Lamb Make Section 13?

“When the stars threw down their spears,
And watered heaven with their tears,
Did he smile his work to see?
Did he who make the Lamb make thee?

Tiger! Tiger! burning bright
In the forests of the night,
What immortal hand or eye,
Dare frame thy fearful symmetry?

One of my fondest remembrances of passing through high school was the time spent in my Grade 12 English classes. My instructor, an elderly, refined English woman by the name of Mrs. Robertson, was the epitome of all those fine qualities that make up a good teacher and, like myself, she loved English literature and in particular the poets and writers of the 18th and 19th Centuries.

I had a school acquaintance at the time, a social buddy as well, who also enjoyed her classes and we would spend much time composing essays and discussing the finer philosophical points of the many enlightened artists of those days. The image above reminds me of the times that we would spend mulling and disputing and synthesizing our nascent, budding interests in truth and art as expressed in all that was best of the English writers.

One such 18th Century composer of rhyme was William Blake, a fearless visionary and valiant fighter for freedom of expression and spiritual questing. It is he whose immortal words contained in his poem The Tiger and quoted above that now move me today to extrapolate from his thoughts written almost two centuries ago yet as bright and burning in my own soul as they must have been when first forged within the mind of Blake himself.

It’s the issue of freedom of speech or expression. Call it what one will it’s the lifeblood of nation’s character, the spiritual essence that permeates all that a people or a culture can produce as the end-product of its collective consciousness, yet, and as fate would have it, at a time in history when one would imagine that after the effects of the Renaissance period and the Age of Enlightenment and Reason we would by now have progressed as a civilization to stages of democratic and literary growth and freedom where such present realities would have once been deemed contrary to reason and logic, we now find ourselves living in times when this amazing, God-given ability to cogitate and question in the open atmosphere of rightful and peaceful liberty is under dire and imminent threat.

And it’s not restricted to any particular nation either. What we’re witnessing now in Canada under the infamous “Section 13(1)” legislation, contained in the Canadian Human Rights Act, is also being played out in practically every other democratic nation around the world using various legalese terminology. Our sister colonies from “down under,” Australia and New Zealand, are now both living under the Iron Heel of repressive “hate” legislation, bred and birthed by the same Zionist forces who assisted in the still-born delivery of Canada’s section 13(1) after the 911 false flag in September of 2001.

As one associate from New Zealand put it after reading my last article The Silence of the Wolves:

“Yes I do believe that people are starting to understand the nature of what you are up against .. because the UK, the USA and NZ have fallen .. NZ is Rothschild property.

I feel certain of your eventual victory .. but it’s for sure they are going to throw everything at your group because Canada is the last man standing .. you cannot be allowed to win.

So I pray for the success of your sacred mission .. Freedom of Speech .. Peace and Justice!”

Well my friend from the land down-under I too am praying for a positive resolution to this over-powering problem that now besets our respective nations and as my old mentor Blake also once stated, until this anti-free speech legislation is erased from the statutes of Canadian jurisprudence, “I shall not cease from mental fight, nor shall my sword sleep in my hand.”

But the purpose of this short Sunday epistle is not to delve too deeply into the nuts and bolts that hold together this flawed piece of legal machinery (sec. 13) now affecting me and my website and those of countless others who write or blog or publish the works of a growing number of dissident thinkers who also realize the nature of the game being played out here with our cherished rights and freedoms.

Rather I’d like to comment on the question posed in the title to this short piece. Did He who made the Lamb also make the Zionists (who in turn made Section 13)? My guess, based on a lifetime of experience in studying practically every esoteric, philosophical, ideological and ontological system known to man, is that He did. The big question though for those who believe in God or a supreme Creator is why?

To find the answer to that I think we need to return to Blake and to ponder the whole question of whether we live in a moral universe or an immoral one and whether or not we can bring ourselves to the point of accepting in general terms the notion that this world is basically a balance between two forces, those of “good” and those of “evil.” It’s a duality; a balance of yin and yang; of light and darkness.

It is interesting that Alexandr Solzhenitsyn touches on this very issue in his small book of speeches given in the USA after his expulsion from the USSR back in the 1970’s called Warning to the West. Again, in his speech to the AFL-CIO in NYC, referring to Communism he said:

“Communism has never concealed the fact that it rejects all absolute concepts of morality. It scoffs at any consideration of “good” and “evil” as indisputable categories. Communism considers morality to relative, to be a class matter. Depending upon circumstances and the political situation, any act, including murder, even the killing of hundreds of thousands, could be good or could be bad. It all depends upon class ideology. And who defines this ideology? The whole class cannot get together to pass judgment. A handful of people determine what is good and what is bad. But I must say that in this very respect Communism has been most successful. I has infected the whole world with the belief in the relativity of good and evil. Today, many people apart from the communists are carried away by this idea. Among progressive people, it is considered rather awkward to use seriously such words as “good” and “evil.” Communism has managed to persuade all of us that these concepts are old-fashioned and laughable. But if we are to be deprived of the concepts of good and evil, what will be left? Nothing but the manipulation of one another. We will sink to the status of animals.

Both the theory and the practice of Communism are completely inhuman for that reason. There is a word very commonly used these days: “anti-Communism.” That is a poor, tasteless locution. It makes it appear as though Communism were something original, fundamental. Therefore, it is taken as the point of departure, and anti-Communism is defined in relation to Communism. I say that this word was poorly selected, that it was put together by people who do not understand etymology. The primary, the eternal concept is humanity, and Communism is anti-humanity. A poor construction. So we should say: That which is against Communism is for humanity. Not to accept, but to reject this inhuman Communist ideology is simply to be a human being. Such a rejection is more than a political act. It is a protest of our souls against those who would have us forget the concepts of good and evil.”

If we take Solzhenitsyn’s word “Communism” and substitute the more modern, recent expression of this self-same ideology and use the word “Zionism” then we will be one step closer to understanding at least the two basic principles here being discussed.

The term good refers to all that is positive, filled with the light of truth, geared toward harmony and peace and plenty; wholesome and holistic and meaningful and pleasing to all from the new-born babe to the eldest of the elders. On the contrary the term evil refers to all that is in opposition to these life-given qualities or traits that are the hallmarks of a sane and healthy and happy and harmonious society. Deception, lies, murder, hatred, subterfuge, hypocrisy, war, pollution, violence come to mind immediately in juxtaposition to the live-enhancing precepts first mentioned.

We might, for the sake of simplicity and analogy compare the two with Blake’s lamb and tiger. They exist in a symbiotic relationship with each other and kept in balance they preserve the equilibrium of the species. On the other hand if the tigers grow to great in their number and their power and their ferocity then the lambs face the imminent threat of both overwhelming attack and possible annihilation.

Today humanity faces just such an existential challenge when it comes to the looming problem of political Zionism and the effects which it has had upon the world since it began to gain excessive power and influence in the affairs of nations around the turn of the 20th Century.

What it boils down to is what Solzhenitsyn warned the west of – deluding ourselves into accepting the evils of Communism/Zionism as being merely relative. Instead we must come to the realization that Zionism is not relatively benign but rather the most deadly ideological program for anti-humanitarianism ever devised by the evil and dark side of the human mind. It must be stopped dead in its tracks and a balance found. Or else?
———-

Arthur Topham is the Publisher and Editor of RadicalPress.com. He is currently involved in a free speech battle with the League for Human Rights of B’nai Brith Canada.

He is also in extremely dire need of financial support to sustain this battle with the forces of repression and censorship as he is not able to work during this period of intense litigation with the Canadian Human Rights Commission and the CHR Tribunal. Any donations therefore would be most welcome. Please see the following url on the Home Page (upper right hand corner) http://www.radicalpress.com/?page_id=657 regarding donations. Also there is a “DONATE” button there for Paypal or here at https://www.paypal.com/cgi-bin/webscr?cmd=_s-xclick&hosted_button_id=4466120 . Feel free to use any of them if you can help out. Thanks.

Arthur welcomes all feedback to his articles and can be reached at [email protected] .