What will the New Year bring for Canadians? By Betty Krawczyk

What will the New Year bring for Canadians? I think the western world lead by the US, and including Canada, is losing its collective mind. It’s as if the US is telling itself fairy tales and getting very angry when any collection of individuals or even one individual, who says, by way of resistance “but wait…I personally do not believe the bull excrement you are shoveling onto my doorstep (and into my airways)”. Not that any important media, or important person, for that matter, at least recognized by Canada, is trying to do this. But I personally rebel when the Canadian press and media, following the US story line, tries to persuade me, and millions of others, that Hillary Clinton lost the election because Putin personally elected Trump as US president by hacking into the American voting machines. I have to say they are lying through their expensive implanted teeth.

The US accusers can’t offer any proof of their accusations of Putin hacking because there isn’t any. I ask, did Putin also hack the machines that put Republicans back into the Senate? And also hack into the House of Representatives voting machines? The cabal of international interests that push austerity onto the people of the world while sucking the economy itself dry says it does. With the help of the Russia Today TV programs of course. The cabal claims that Putin, through RT, plays evil, insidious propaganda lies that are also very powerful and causes strange things to happen in America. Many US lawmakers are calling for the US to outright ban RT being broadcast in and into America. So much for freedom of speech. So do I watch RT?

I do, and I don’t even have television. I get RT through my computer. I also tune in to other alternate news casts but none have the constantly growing ratings of RT. I recommend RT to everyone. Of course they are presenting the Russian point of view which the Russians say is the purpose of the news shows. Why would the Russians have a television show of Russia Today if not to present the Russian point of view? How can Canadians and Americans make up their minds about anything if they only hear one side? That’s all we hear in most of the news programs that service the cabal (the side that CNN and 90 per cent of the other US broadcasting and our very own CBC) wants us to hear. Shouldn’t we also hear the other side? Shouldn’t we all hear honest debate on how “the liberation of Aleppo” in The Russian media becomes the “the downfall of Aleppo” in the American media? Even the government of British Columbia seems to think so.

The province of BC is now advertising on the Russian channel. The BC provincial government has been running a large, chatty video showing and explaining how wonderful British Columbia is to countries everywhere through the RT channel. Christy Clark knows how many people worldwide watch RT. Other Canadian businesses are beginning to catch on, too. I think it is too late to shut RT up. The cabal is trying to distract the people who are slipping out of the middle class, and even out of the working class, into abject poverty by blaming their economic and physic woes on the bogyman Putin instead of their own blood sucking policies which will eventually fail. However, I think a “hard rain has to fall” before the US and Canada comes up with economic programs that allow all in our countries to prosper, not just the banks, and without prosperity being based on war. But war with Russia is exactly what the US is conditioning the western world to accept by constantly presenting Putin as being beneath the consideration of civilized nations; of being inhuman. The US headed cabal wants war with Russia in the New Year. And apparently, listening to the CBC, Canada is willing to tag along. 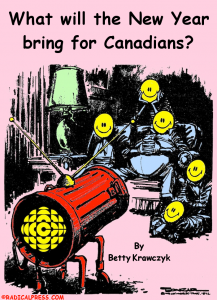