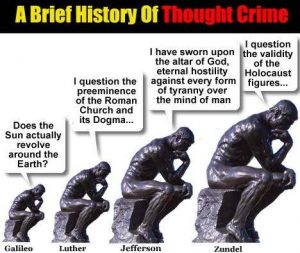 Thought Makes You Free In the EU [and Canada]
by Bernhard Schaub
The world is in flux. The financial crisis has shattered our too-blind faith in the regnant economic and political system. The good in this crisis: it makes you think. Many realize that the remedies proposed by government are no remedies at all, but merely measures intended to keep the existing system alive. The idea is spreading that the whole thing in reality is a giant redistribution intended to concentrate money and power into even fewer hands than before. It is high time to end our unquestioning ways with some serious thought.
The present economic system-like all systems-rests on certain axioms, certain underpinnings, that cannot be disturbed without putting the entire edifice into danger of collapse. Such underpinnings are for that reason always sacrosanct.
He who wishes to be accepted, or even merely tolerated in our society does well to acknowledge, or at least not to openly dispute, certain core beliefs: To these belong devotion to the free market, including debt financing and the independence of the banking system, to so-called parliamentary democracy, including the attendant two-party system, devotion to philo-semitism, multiculturalism, homosexuality, and abortion together with the highest praises for the civil rights to which one considers oneself entitled.
It is even permitted to belong to whatever religion or philosophy one might wish to-but subject to the unstated condition that one doesn’t really take it seriously. Otherwise, one acquires very quickly the odor of fundamentalism.
In today’s political and cultural landscape, a fundamentalist is anyone who holds his Catholic, or Evangelical, or Islamic, or national-or whatever feelings of any kind-above those highest of values enumerated above. Therefore, fundamentalists cannot be tolerated under the global New World Order that is the central theme of American politics. It is only a very slight distance that separates the fundamentalist from the charge of being a terrorist. And it is not necessary here to spell out what sort of treatment awaits terrorists. That has been ordained by 9/11.
The thoughtful European notes with puzzlement that the proscriptions set forth by Political Correctness and monitored by the culture and the law grow more numerous every day. The citizen is condemned to silence by all manner of gag laws and cowed by the looming threat of the EU criminal code because he no longer knows what is punishable, nor why, nor where. Lately, we’re told, nearly 14,000 “rights violations”-whatever those might be-were committed in Germany in 2008, of which fully 700 were violent. Therefore, there remain from these numbers about 13,000 nonviolent “rights violations.” This is notable, especially in light of the incessant reminders by self-righteous German politicians to China and other countries to “uphold civil rights.” Obviously, the sacred rights of freedom of expression, academic freedom, religious or philosophical belief, etc., are valid only so long as they don’t oppose any of the listed Canons of Western Values.
Catch-22
Here is a Catch-22. It is profoundly disingenuous, not to say outright mendacious: an easily seen-through maneuver for the benefit of the ruling elites of the West.
The greatest taboo of Western propriety, however, is of a historical nature. That is, where the matter has to do with Nazism or the so-called Third Reich, contemporary thought abdicates completely. The brain is relieved of its function, and quasi-religious reflexes take over. All powers of discernment cease, any inquiry into the Holy Writ is thought inappropriate, even malign. Here there is only one viewpoint allowed: the Nazis-read, the Germans-are perpetrators, and exclusively that, and the Jews are victims, and innately and eternally, no less. The uproar about Erika Steinbach, Eva Herrmann, Martin Hohmann, and General Gunzel serves to illustrate. Whoever doubts these supreme tenets of belief is no longer a discussion partner, but instead a leper and a heretic rolled into one, subjected instantly to inquisitorial judgment, ostracism, and economic destruction. And everyone who has anything to do with such a person must immediately distance himself.
This goes double for questions concerning the Holocaust, the inner circle of this minefield. The never-ending rumble of the media concerning Bishop Richard Williamson has brought this taboo to the fore once again. Mrs. Merkel feels called upon to instruct the Pope; the Pope feels called upon to call Bishop Williamson to account; the attorney general of Regensburg proposes, and the Justice Department considers issuing, an international arrest warrant for the churchman-and why? Because he judges a historical matter differently from the way it is usually and permitted to do. This constitutes heresy. This means nothing else than that a historical event has been removed from the domain of scholarship and with that, of reasoned discussion, and elevated into the domain of religion, and indeed a kind of world religion that in Germany has unbeknownst acquired the standing of a half-official state religion. 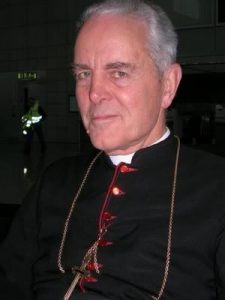