Nothing left of Canada’s political culture by Greg Felton 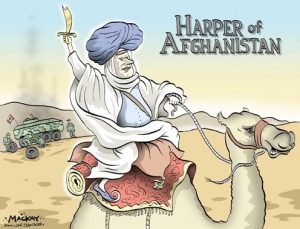 Canadian Arab News
January 13, 2010
Making New Year’s Resolutions is a ritual that I’ve never had much use for because the first of January is no more significant than the first day of any other month. Indulging the myth that a new year portends new beginnings invariably leads to disillusionment after the events and behaviours of the previous year show unexpected persistence.
This painful fact is particularly acute for many Canadians who yearn for a genuinely national government, but will be forced to endure yet another year of servility and imbecility from Israel’s proconsul Stephen Harper and his ruling clique of hasbaratchiks.
The problem is that Canada’s political spectrum, like that of the U.S., has shifted so far to the right that rational debate and informed opposition have become delegitimized. We used to speak of “right-wing” and “left-wing” to describe political differences, but in the absence of a political centre “right” and “left” have no meaning. “Left” and “leftist” have now become epithets used to stigmatize and delegitimize those who oppose extremist “right-wing” dogmata.
A graphic depiction of how absurdity becomes consensus politics comes to us courtesy of Joseph P. Overton—researcher, author and senior vice-president of the Mackinac Center for Public Policy.
The “Overton Window” (see diagram below) indicates the range of ideas deemed acceptable in a society at any given time. Under normal, rational, circumstances, the window would oscillate between centre-left (L1) and centre-right (R1), thus clearly excluding the extremist/unacceptable range of ideas (L3-L4 and R3-R4).
However, under the influence of Israel’s fifth column in Ottawa, Canada’s window has shifted into the “unacceptable” R4 range. Under a steady propaganda barrage from hasbarats and hasbaratchiks, ideas once easily recognizable as unethical, un-Canadian, or downright criminal have acquired respectability. In turn, views opposed to the new extremism are now so far from view that they are all deemed unacceptable.
When, exactly, our political window shifted to the Christian/zionist lunatic fringe is debatable, though a case could be made that it occurred when Paul Martin became Liberal Party leader after the resignation of Prime Minister Jean Chrétien, the last real Canadian to hold that position.
Martin was, and is, an Isramerican sycophant, so immediately after he took over Irwin Cotler became Israel’s main man in cabinet; the “Liberal Parliamentarians for Israel” clique was formed; and Canada’s voting pattern at the UN became abjectly pro-Israeli. Harper is the Canadian “Likud” analog to the “Labour” Liberals, now led by Michael Ignatieff. 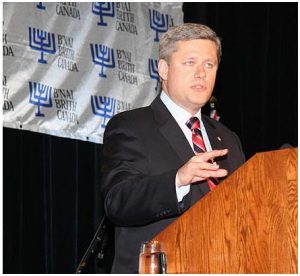 A state where the government politicizes acceptable discourse is, of course, a tyranny, and that is what R4 Canada is. Don’t believe me? Here’s what columnist Lawrence Martin had to say recently in the Globe and Mail about Harper’s hubris:
“It is said that a hallmark of democracy is the toleration of dissent. Best leave that one in the church pew. Exceptional measures need be used to crush the opposition. Stuff such as taking the unprecedented step of launching personal attack ads between election campaigns. Or trying to push through a measure that would effectively cut off financing to the opposition.
A heavy dose of demagoguery also can go a long way. Play on simple prejudices by accusing opponents of not supporting the troops or of being anti-Israel. If nothing’s working, if the going gets really tough, don’t hesitate to bring out the heavy timber. Just after Parliament has reopened, have it shut down.”
Given that Canada has already tilted to the extreme right, is there any hope of returning the country to the rational centre? Perhaps not all the way, but two recent events give reason to believe that the country can be pulled back, however slightly.
KAIROS
For the second time in a year, Jason Kenney, Harper’s Minion of Official Bigotry, used the “anti-Semitism” smear to justify cutting off federal funding to a non-zionist organization. Last March it was the Canadian Arab Federation, because Kenney objected to being called a “whore.” In December, Kenney denied a request for $7 million over four years from KAIROS, a Christian aid agency that promotes human rights, justice and peace, viable human development, and ecological justice.
Jason Kenney – CPC’s Official Bigot
During a speech at the Global Forum for Combating Anti-semitism (!) in Occupied Jerusalem, Kenney accused KAIROS of promoting anti-semitism, and taking a leading role in promoting the BDS (boycott/divestment/sanctions) campaign against Israel. The fact that the accusation was patently false didn’t matter. Consider his audience and where it was uttered.
That this attack was politically motivated malice also comes from Harper’s own Minion of International Cooperation Bev Oda, who essentially called Kenney a liar! She told KAIROS that funding was denied because “the group did not fit the government’s priorities of food security, helping youths and economic growth”—not a word about anti-Semitism.
The Dec. 18 Toronto Star editorial captured the overwhelming public and political revulsion at the attack on KAIROS: “Is everyone who disagrees with Prime Minister Stephen Harper a Taliban stooge, a raving anti-Semite or a loony-left extremist? You’d think so, to hear the shabby low blows Harper and his cabinet are forever aiming at any and all who dare to criticize federal policy…The Conservatives invite contempt with these endless, over-the-top smears. They discredit their party and its policies.”
PARLIAMENT
In his column, excerpted above, Lawrence Martin made reference to Harper’s decision to have Parliament shut down (prorogued) until after the Winter Olympic Games. This is the second time in just over a year that Harper has pulled this stunt. On Dec. 4, 2008, he called on the Governor-General to prorogue Parliament because he was afraid of being defeated by a coalition of opposition parties in the House of Commons. The coalition subsequently petered out.
This time, Harper is afraid to face questions about his government’s knowledge about the torture of Afghan detainees, and to exploit the closure to add five stooges to the Senate to overcome Liberal “opposition.”
As a result of this chicanery, 37 bills will not be passed and, most significantly, the committee investigating the detainee cover-up will be disbanded. Harper will not have to face Parliament again until March 3.
You know a government has gone beyond the pale of acceptable conduct when a daily newspaper, in this case the Globe and Mail, runs a front-page editorial to denounce it: “The Prime Minister is turning prorogation…into an underhanded manoeuvre to avoid being accountable to Parliament. In the interests of political expediency, the government will diminish the democratic rights of Canadians.”
It’s hard to imagine a greater insult to this country that a prime minister who is afraid of the law, unless it’s a prime minister who is an obvious lackey for a foreign government. In Harper’s case both are true.
The person to benefit most from Harper’s latest chicanery is Liberal leader Michael Ignatieff. He has denounced the suspension of Parliament as politically arrogant, and has promised to reinstate funding for KAIROS. If Harper wanted to sabotage his government’s chances of forming a majority government, to say nothing of being reelected, he could not have done a better job.
Until now, Ignatieff has been seen as Harper’s enabler, a weak leader who lacks the balls or party cohesion to force an election. Now, he can act like Captain Canada champion of democracy and scourge of the enemies of Parliament. Ironically, though, if an election were held tomorrow Canadians still could not elect a proper government: a choice between the Harperites and Ignatieff’s Liberals amounts to no choice at all, because Ignatieff learned the hard way that thinking for oneself amounts to political suicide.
If nothing else, getting rid of Harper would move Canada’s political window from R4 to R3. It’s a start.