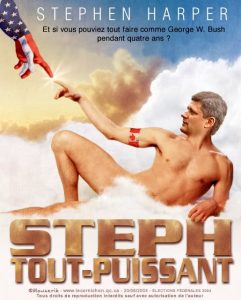 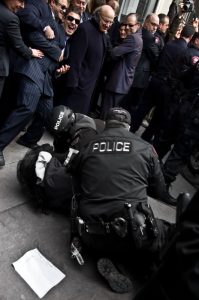 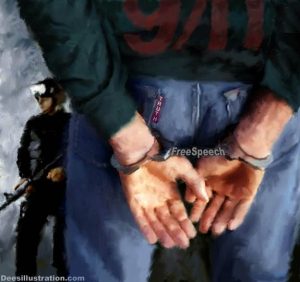 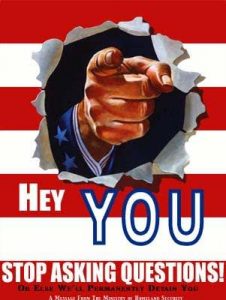 Calgary Police “taking down” Splitting the Sky while attempting to make a citizen’s arrest of War Criminal George W. Bush in Calgary, Alberta on September 17, 2009.
________________________________________________________________________________
Arthur Topham RP Publisher
March 10, 2010
Editor’s Note:
It’s fairly evident from the manner in which this case was handled that the Zionist-controlled media in Canada and elsewhere doesn’t want the issue of Bush the Barbarous brought to the attention of the general public. A protracted trial in which credible authorities might offer evidence in the defense of the accused and, God forbid, Splitting the Sky is given an opportunity to actually voice his convictions, is not the Zionist way of doing business. Better to just quash the whole damn thing and once the issue has filtered out of the public’s mind then bring in a ruling further down the road to tyranny and censorship.
Splitting the Sky
It’s my humble, yet considered opinion, that Canada’s judiciary, like the msm, is so infiltrated, permeated and manipulated by these Zionist/Jew lobbyists and their lawyer henchmen and women, that our courts today are as likely to spawn honest and just decisions as the Zionist-controlled msm is likely to present information that hasn’t first been run through the Orwellian Double Speak wringer prior to general publication.
Both these institutions (and others) bear witness to the fact that our civil and legal infrastructures are firmly in the hands of foreign, seditious entities who are using them for power and control and manipulation of the collective mindset of the Canadian public while their subsidiary organs of control, i.e. the multinational corporations, be they oil or ag or pharma or cult or whatever, drain this country of its natural resource wealth and human potential.
Due to the Zionist’s inordinate and immoral power via their financial and media influences men like Anthony J. Hall are forced to equate the machinations of the courts and the police and media to secondary and tertiary linguistic labels such as “oil conglomerates” all in order to escape the deadly-poisoned arrows of the Zionists who let fly their “anti-Semitic,” “racist,” and “hate”-tipped barbs at anyone who comes near to calling a spade a spade or a Zionist a Zionist.
War Criminal psychopath G.W. Bush, like his War Criminal psychopathic partner in crime, Canadian Prime Minister Stephen Harper, are mere puppets to the Israeli Jew lobby; flunkies and lackeys and cretins of the most despicable type who, under their false pretense of being “Christians,” carry out the dirty work of slaughtering the sons and daughters of American and Canadian citizens in imperialist wars of aggression against innocent foreign nations all for the benefit of these Zionist interlopers who haunt and invade our very lives via their omnipresence throughout the media and Canada’s judiciary.
More than just a touch of levity as War Criminal Harper reaches out to G.W. Bush
_________________________________________________________________________
Well, these traitorous intruders have been releasing their bolts of vituperative lightning at me, my family and my publishing business for over two years in a relentless attempt to silence my voice and the voices of countless others whose opinions and views I carry via RadicalPress.com and the Yahoo group site known as Anti-Zionist Canada. For the Full Monty on the complaint case involving RadicalPress.com and B’nai Brith Canada please see: http://www.radicalpress.com/?page_id=995 . They literally hate to see views and opinions and ideas and truths that conflict with their own morbid, draconian and hate-filled mission of destroying every nation state on the face of this globe in order to replace them with their “International” aka Zionist New World Order template of global governance.
What should have been a media bonus for the 911 Truth movement and the supporters of Palestinian sovereignty and a solid, direct hit on the forces of darkness that now control the global political and financial marketplace of ideas and opinion has once again been nullified and thwarted thanks to the machinations of those within the system as it now exists.
If we are ever to gain ground in this protracted battle with the Zionist forces we’re going to have to sooner than later face the fact that we must call these misfits by their real name and publicly identify them and the organizations through whom they operate in order to infiltrate our governmental, civic and social/cultural structures. Pussy-footing around this salient and critical factor because of fear and doubt will only prolong the time when the shyte must inevitably hit the proverbial fan and all fecal hell breaks loose.
Let us try our best in the interim time period to keep Splitting the Sky’s courageous efforts alive.
Shine your Light for Love, Peace & Justice for All,
Arthur Topham
Publisher/Editor
The Radical Press
Canada’s Radical News Network
“Digging to the root of the issues since 1998”
http://www.radicalpress.com
[email protected]
—————————-
BE SURE TO WATCH THESE VIDEOS OF CYNTHIA MCKINNEY & STS SPEAKING AT THE UNIVERSITY OF CALGARY
Cynthia McKinney Meets Splitting the Sky at University of Calgary’s Peace Consortium (Part 1)

_____________________________________
http://truthjihad.blogspot.com/2010/03/splitting-sky-case-shut-down-interview.html
Catch my live interview with Splitting-the-Sky, Cynthia McKinney, and Anthony Hall coming up at 2 pm Central! http://www.noliesradio.org
Kevin Barrett
http://www.truthjihad.com
Author, Questioning the War on Terror: A Primer for Obama Voters: http://www.questioningthewaronterror.com
Bush League Justice in Judge Manfred Delong’s Calgary Court
Anthony J. Hall
Professor of Globalization Studies
University of Lethbridge
10 March, 2010
Judge Manfred Delong shut down the trial of Splitting The Sky versus George W. Bush on the second day of proceedings. The court denied STS his frequently emphasized request to have two witnesses give evidence in his defense. Those witnesses were myself and Cynthia McKinney. The trial came to an end just as Ms. McKinney arrived in Calgary from London. The US-based oil conglomerates active throughout Alberta form the core business constituency of the Prime Minister Stephen Harper, who represents a Calgary riding in Parliament.
The court accepted two documents as evidence for the defense. One is Gail Davidson’s widely disseminated legal opinion for Lawyer’s Against the War. STS and I studied this document closely in the days leading up to my friend being arrested for his arrest attempt. LAW’s legal opinion highlighted some of the evidence, statutes and treaties to brand Bush as a “credibly accused war criminal” that should not be allowed into Canada. Prior to Bush’s touching down in Calgary to address an audience of oil executives, Davidson’s documentation was distributed widely to officials of the Harper government and Canada’s Royal Canadian Mounted Police.
The other exhibit for the defense was my own paper that I originally presented at an invited academic venue at the University of Winnipeg. It has been published under a variety of titles on the Internet, including at Global Research.ca, 911 Blogger.com, 9/11 Truth.org and Voltairenet in both French and English. My initial title for it is “Bush League Justice: Should George W. Bush Be Arrested in Calgary Alberta and Tried for International Crimes?”
Delong will deliver his ruling on June 7. The case for the prosecution both revealed and obscured much about the new police strategies being employed throughout North America to monitor, manage, divide and spin doctor demonstrators seeking to call attention to their political dissent. In my opinion the Crown’s chief agent of prosecution, Tracy Davis, acted more as an advocate and defender of the police rather than as a representative of the Canadian people through Her Majesty as she is required to do according the constitutional tradition of the British Commonwealth.
————-
Anthony J. Hall can be contacted at [email protected]
————-
Arthur Topham is a writer and the Publisher and Editor of RadicalPress.com living in the wilds of central British Columbia, Canada. He is currently involved in a sec. 13(1) free speech battle with Agent Z and the League for Human Rights of B’nai Brith Canada.
Due to the nature of these sec. 13 “hate crime” complaints Arthur is under constant pressure to produce legal documents and maintain a livelihood at the same time. As such he is always in need of financial support to sustain this battle with the forces of repression and censorship involving both the Canadian Human Rights Commission and the CHR Tribunal. Any donations therefore would be most welcome. Please see the following url on the Home Page (upper right hand corner) http://www.radicalpress.com/?page_id=657 regarding donations. Also there is a “DONATE” button there for Paypal or here at https://www.paypal.com/cgi-bin/webscr?cmd=_s-xclick&hosted_button_id=4466120 . Feel free to use any of them if you can help out. Thanks.
Arthur welcomes all feedback to his articles and can be reached at [email protected] or via telephone at (250) 992-3479.