Former US Attorney-General Ramsey Clark to Speak at the University of Calgary’s Peace Consortium in Defence of Splitting the Sky The Man Who Attempted a Citizens’ Arrest on George W. Bush 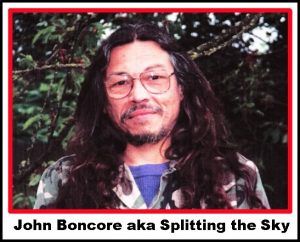 “George Bush hasn’t suffered at all over the monumental suffering, death, and horror he has caused…no matter how many American soldiers have died on a given day in Iraq (averaging well over two every day), he is always seen with a big smile on his face that same or next day

Vincent Bugliosi, The Prosecution of George W. Bush for Murder, 2008

Ramsey Clark will arrive in the Canadian oil-patch city of Calgary, Alberta, Canada, this coming June 6th and 7th, mounting pressure on attempted a citizen arrest on George W. Bush on March 17, 2009 when the former US president was addressing an audience of business people at the TELUS Convention Centre in the downtown of Calgary.2

In his March 2010 trial STS invoked the Crimes Against Humanity and War Crimes legislation, which was enacted by the Canadian parliament in 2000, to submit to the court that he was implementing the law by seeking to apprehend Bush, and was unjustly arrested by police who were in effect “aiding and abetting a credibly accused war criminal.

Former US Congresswoman Cynthia McKinney came to Calgary to attempt to testify in the March trial but was prevented from doing so as the judge shut down the trial earlier than anticipated. Instead McKinney spoke at the University of Calgary in support of Splitting the Sky.3

It is hoped by supporters of justice that the arrival of Ramsey Clark in Calgary will help to publicize this unprecedented case in Canadian legal history, the knowledge of which the state and their media accomplices have made a concerted effort to suppress and censor from the public domain.

Ramsey Clark has a long history of being a thorn in the side of those political elites who would seek to apply the law expediently rather than unanimously. Born in Dallas, Texas, the son of prominent jurist Tom C. Clark, Ramsey Clark witnessed as a young man the Nuremberg trials following World War II. Clark would go on to graduate from the University of Chicago law school and become Attorney General of the United States under the administration of Lyndon Johnson.

Clark has worked tirelessly throughout his career as an outspoken civil rights attorney advocating for many prominent activists and political dissidents. After the 1971 Attica Prison debacle Clark replaced William Kunstler as Splitting the Sky’s legal advocate. STS’s charges were acquitted as a result of Clark’s relentless advocacy.

On April 3, 2010 Clark was elected at a meeting of over 150 lawyers, legal scholars and human rights campaigners, to be the chairperson of a new international campaign to investigate the alleged crimes against humanity committed by the Bush regime.

Global Research reported: “Ramsey Clark emphasized that it is the imperative responsibility of the American people to relentlessly pursue this investigation, and to seek prosecution and indictment inside of the United States…Ramsey Clark made the point that all the war crimes and crimes against humanity flow from the commission of the most supreme crimes which he identified as the Crimes against Peace. This was the finding at the Nuremberg trial, and it is enshrined in the Nuremberg Principles.6

Clark’s reference to precedents set at Nuremberg, a German city, encourages those of us who would like to see Calgary’s image in the world evolve from one of Harperite cowboys and vulture-capitalists into a city where law enforcement agencies set precedents in human rights jurisprudence and international law with the support of the polity’s residents.

Perhaps such a paradigm shift would ignite a necessary atonement for the state-endorsed despoliation of the Indigenous Peoples of the region’s ancestral resources, lands and waters which has been unpardonably gifted to mainly Texas-based oil and gas conglomerates.

How Judge Manfred Delong will be influenced by Clark’s arrival in Calgary is yet to be seen. Will Judge Delong compound the Culture of Impunity afforded to credibly accused war criminals emanating from Anglo-America – which the Harper-minority government and their equivalents around the world have supported – by “setting an example and sentencing STS to spend two-more years of his life behind bars and burdening him with a fine of up to $5000? Or will he realize the broader implications of this trial and dismiss the case before the court that STS “obstructed a police officer?

The more citizens who mobilize in solidarity with STS the less able the state and their media accomplices will be to sweep the profound juridical questions being raised by STS, Clark and others, under the carpet.

The proceedings are as follows:

The sentencing of Splitting the Sky commences on June 7, 2010 at the Calgary Courts Centre.