[Editor’s Note: I have known Frank Martin and Helen Michell for 22 years now and have worked with them on different issues to do with native sovereignty, Residential School abuse and basic human rights issues. Both Helen and Frank are hard core, dedicated activists who have given their adult lives to the struggles that indigenous natives face around the province. As Helen states in her article below she would need to write a book just to record all of the incidents in her and Frank’s life where they’ve been unduly stopped, pulled over, forced off the highway, accosted, harassed, beaten up, forced into courts of law and teased and terrorized by the so-called authorities whose job it is to uphold the law and treat all people equally. Their trials and tribulations epitomize what is a daily occurrence for so many indigenous natives here in ‘beautiful’ B.C. Please read Helen’s story and do what you can to pass it along in the hope that someone, somewhere, may find it in their heart to assist these folks and help them in their quest for justice.]
POLICE ABUSE, HARASSMENT, DISCRIMINATION & RACIAL PROFILING OF INDIGENOUS NATIVES CONTINUES
by Helen Michell
Sunday, February 27, 2011 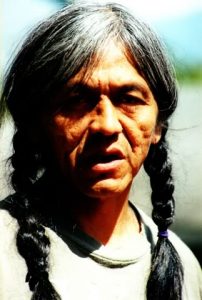 To all who may be concerned: This letter is about the abuse, intimidation, harassment, discrimination, racial profiling that we as indigenous people of British Columbia, Canada have to put up with regards to the authorities of of this unceded province called British Columbia. Authorities such as the Vancouver City police, the Royal Canadian Mounted police and the Social Services of this province. As indigenous people, we have gone through so much discrimination and intimidation and racial profiling from these so called authorities.
I am an indigenous woman. I am also a disabled indigenous woman and an elder who has had to live in a wheel chair since 2000. In the year 2000, at the end of July, I and my husband Frank were forced off the highway by an R.C.M.P cruiser that rammed our vehicle off the highway north of Cache Creek, B.C., and left me disabled. Since than I have come a long way along the road to recovery but I’m still not fully recovered. I will always have to get around in an electric wheel chair.
I am also a witness to many of the abuses we as indigenous people have to live with on a daily basis. I am also an indigenous human rights defender and an outspoken indigenous activist who really cares about her indigenous people.
As a child, I witnessed my elders being threatened by the RCMP with prison or Esendale which was a place they put crazy people. Back then the police used ‘the mental health act’ to force indigenous people into jails or off the streets. This ‘mental health act’ was put on the shelf for most of my life time. Now this ‘Mental health act’ is being re-enacted and put back into action once again. This act has forced many of our indigenous people off the streets and many have been given huge fines which most cannot pay. Fines such as ‘jay walking’ and for ‘being drunk in a public place’. Just being seen on the streets of Commercial Drive of Vancouver, B.C. is now a crime if you are indigenous. Age does not matter but the color or your skin matters. The Vancouver city police have become judge, jury and executioner when it comes to indigenous peoples of B.C. and so has the Royal Canadian Mounted Police of B.C.
In the past few days, the indigenous youth of the Vancouver Indian Center have also come to us and asked us for help from the abuse of the Vancouver City police. They are also being chased around by the police. They are also being forced off the streets of Commercial Drive. Where are these indigenous youth going to go? There is no other place to go. Late at night we witnessed 12 and 13 years old indigenous youth at the Vancouver Indian Center being questioned by the Vancouver police. Why are they allowed to question the indigenous youth without the presence of the elders? This is abuse of their authority in attempting to scare the youth off the streets.
This is only one example of the city police abuse of their authority: On February 24, 2011, we were at the Vancouver Indian Center for a memorial for one of our elders who passed away. This memorial was held from 7 pm until 10 pm. We left the Indian Center to go to our vehicle. On our way to the car we noticed the police cars around one of the apartments near our vehicle. We didn’t think anything of it then. But when we got into our car and drove up Commercial Drive one of the police cars started to follow us for quit a few blocks before they turned the police lights onto us. We immediately pulled over our car. At first the police officer said we were being stopped for a traffic infraction where my husband, who was a passenger, was not suppose to be driving. He wasn’t as I was in the the drivers seat and was the driver with a valid drivers license. The police officer took my driver’s license and the registration papers for the car.
The police officer was gone with our papers for quit a long time before he or she came back. I say he or she because I could not tell if he or she was a male or a female. All along I thought he or she was a male but when the police officer finally gave us a card, the card said the name was Jocelyn Deziel, pin 2067. This whole incident went from a traffic matter to a drug matter within a few minutes. The police officer said that the RCMP informed her that we were busted at our house for a ‘grow op’ marijuana matter, which was false. This officer said we had a few pounds of marijuana in our car. He/she ordered us out of our car so he/she could illegally search our vehicle. I, being disabled, had to sit on the back bumper of my vehicle for the whole one hour while the car search was going on. Plus, it was 5 degrees below zero outside and freezing. I was so cold my legs practically froze by the time I was allowed to go back into my car. This treatment toward us was ‘inhumane treatment’ and was uncalled for. This police officer practically took the inside of our car apart, front to back, top to bottom, and found NOTHING. This police officer was extremely rude and discriminating.
Frank&HelenArticle
An all too familiar scene on Vancouver’s streets with flashing police lights
___________________________________________________________________________