Doenitz and the American Brass by Hans Krampe

The Nuremberg Trials Show, a grand standing, self righteous performance launched under the name of ‘International Military Tribunal’ (IMT) — none of its members, except for the Russians, having actually fought in the war — was a politically motivated orgy of revenge, malice, hypocrisy, humiliation and lies; the icing on the cake of the simultaneously ongoing allied mass murder of the German populace, then very much in progress.
It was a copy-cat Stalinist show trial, stage managed by Jewish controlled media hacks, whose principle contribution to the war had been the fabrication of anti-German hate propaganda throughout, performed by mean spirited lawyers, oozing with malice, principal among them high ranking Soviet war criminals; zealously assisted by largely Jewish torturers (interrogators) and sadistic murderers (executioners), often in brand new uniforms.
Ten years later, in response to invitations from U.S. Rear Admiral Dan V. Gallery, over 400 written and signed statements, made by hundreds of U.S. and international Flag Officers, congressmen, Supreme Court judges and diplomats, including the future U.S. President, John F. Kennedy, and prominent personalities of the time condemned the Nuremberg Trials as a disgraceful act of revenge by the victors over the vanquished; as a step back into the dark ages as well as a stain on civilization and a shameful slander of professional soldiers; because the German Flag Officers had done what all Flag Officers in the world do, namely, nothing but their jobs they had sworn an oath to do in case of war for their country.
This expression of belated public outrage happened on the occasion of the release of Grand Admiral Karl Doenitz in 1956 from ten years of incarceration.
Photobucket
To be able to incarcerate or sentence to death the German leadership, military as well as civilian, the Nuremberg ‘judges’ had to break international law by inventing ex post facto crimes, had to suppress the evidence of the defense, produce forged copies of ‘confessions’, permit bizarre and fraudulent testimonies and ignore their own constitutional principle of habeas corpus by the American lawyers. That the Germans were guilty was a foregone conclusion, as casually accepted as the American’s indoctrinated Germanophobia and hate. No forensic investigation was necessary, neither then nor to this day.
Most bizarre was the presence of Soviet officers, the worst war criminals of WW II, presiding as judges over their German victims, on which they were guilty of having perpetrated unspeakably more heinous war crimes, on a humongous scale, than the horror stories that they had fabricated about the ‘Nazi Regime’. Their Katyn massacre of 20,000 Polish officers and members of the Polish intelligentsia, discovered and exposed to the international media in 1943 by the German Wehrmacht, they now accused the Germans of, using expertly forged documents and witness statements.
Photobucket
In Admiral Gallery’s opinion the Nuremberg Trials were a kangaroo court by the misnomer of ‘International Military Tribunal’ and that this name was a libel on the military profession. He felt relieved that there was nothing military about it, that it was in fact a lawyers’ tribunal and sarcastically observed how the American Bar had kept bashfully silent on that topic since, not wanting its role in this disgraceful and macabre theater to be widely known. He was ‘glad that our military men had nothing to do with it’. Hundreds of U.S. Admirals and Generals not only agreed with Admiral Gallery, but some also spoke highly and with respect of Admiral Doenitz.
Doenitz, Raeder, Jodl and many others were being charged with 1) having conspired to wage aggressive war, 2) having waged aggressive war and 3) violated the laws of war at sea; all this applied especially to German submarine warfare. Referring to these charges Admiral Gallery exclaimed in exasperation: ‘How in the name of common sense a military officer can wage any kind of war except an aggressive one without being a traitor to his country, I’ll never know.’ 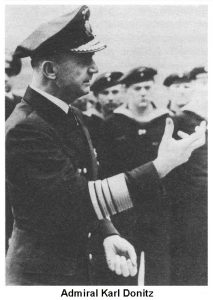 Hitler,Keitel,Jodl
Doenitz requested U.S. Admiral Nimitz to be summoned as witness for the defense, to explain his style of submarine warfare in the Pacific. Nimitz was unable to appear in person, but declared in a sworn statement that U.S. submarine warfare was just as aggressive in the Pacific as the German submarine warfare in the Atlantic, that in fact no other mode of submarine warfare was possible in this day and age and that the outdated laws of war at sea were impossible to adhere to since they applied to the era of tall ships, which was long gone. This resulted in an awkward back-paddling by the kangaroos.
Admiral Doenitz was acquitted of the first charge but found guilty of the other two. To find fault with his impeccable and capable conduct of the war they accused him of having deliberately prolonged it, ignoring the fact that in 1945 Doenitz had to evacuate from East Prussia ten times more refugees than the British had evacuated from Dunkirk. As soon as he had brought as many refugees as possible to safety he surrendered. It seemed to be of no consequence to the kangaroos that it was in fact the allied demand of unconditional surrender which prolonged the war. The German leadership was fully aware what they would be facing in such an event and rather chose to fight to the last bullet than to submit themselves voluntarily to certain ignominy and horror. As it turned out, what followed proved them right, in spades.
Raeder was sentenced to life, Doenitz to ten years, while many others were sentenced to be executed and summarily strangled to death.
While all these high ranking allied officers commiserated with their enemy colleagues, none of them seemed to have known clearly, nor cared, why the war was fought. It was enough for them to get the order to fight, whipped into the mood by relentless hate propaganda. It sufficed for them to ‘know’ that the German government was evil; just as General Colin Powell, presiding over the largest arsenal of weapons of mass destruction in the world, ‘knew’ that Sadam Hussein had weapons of mass destruction. Ten years too late, they remembered that they owed a debt of chivalry and an apology to Admiral Doenitz, et al, not to mention justice.
They couldn’t find it in their hearts to extend the same sentiments to Rudolf Hess, who languished in Spandau, a prison built for 600 prisoners, the only one there, kept in solitary confinement until 1987, when he was murdered at age of 93, strangled to death.
Such sentiments were also absent when they ‘merely did their sworn duty’, bombing the German civilian population to smithereens. And even in 1956, as they expressed regret for the treatment of German flag officers, they couldn’t have cared less what they had done to the German nation at large. Not one of them expressed any regret about what they had done to German women and children, by the millions; to the German POWs — AFTER THE WAR — by the millions; or the flattening of the beautiful towns and cities that had taken more than a millennium to build; not to mention the theft of trillions of dollars worth of German patents and industrial hardware. They had just followed their orders, as they had sworn an oath to do. What was a virtue for them had to be, of course, a vice for the Germans, rooted in evil Bismarck’s Prussia. It was the pin-point rationale of the kangaroos sitting in judgment, tailoring crimes to fit the anti-German war propaganda.
According to Admiral Gallery, however, just that is the proper conduct of flag officers, ‘after all, one thing the much maligned military brass must do, in a democracy as well as a dictatorship, is swallow their convictions, if any, and do as they are told by their politicians…’ In other words, for a flag officer it doesn’t matter what kind of political creep gives the orders, it’s best not to have an opinion about anything, to avoid unnecessary problems with indigestion. By this rationale, Flag Officers are capable of ordering the shooting on their own unarmed people, if ordered to do so, as they did in 1970 at Kent state university, or as they are currently doing to innocent peoples all over the world.
It doesn’t seem to occur to any of them that they also swore an oath to defend the United States and its constitution against all enemies, foreign AND DOMESTIC. Yet, they are blind to the enemy within — their own government — and keep following the orders, with a few notable exceptions, of presidential morons with blatantly genocidal intentions, to wage aggressive war without there being ever a hint of a threat, other than manufactured ones. The American brass seems to have been oblivious that Adolf Hitler and Benito Mussolini were the only ones who had made every effort to avoid WW II, while their own government did the opposite.
The 400 expressions of regret about Admiral Karl Doenitz’s incarceration and their condemnation of the IMT were edited and published in book form in 1976 by H.K. Thompson, a Yale graduate of naval science and history; and Henry Strutz, a teacher of foreign languages and history. The title: Donitz at Nuremberg: A Re-Appraisal, War Crimes and the Military Professional.
Needless to say, it never became a bestseller.