‘What constitutes ‘hatred’ is not defined in the Canadian Human Rights Act. It is a question of fact.
It is generally accepted to refer to extreme ill-will and is an emotion which allows for ‘no redeeming qualities’ in the person at whom it is directed.
‘Contempt’ is similarly extreme and includes circumstances in which the object of one’s feelings is looked down upon, belittled, despised, dishonored or disgraced.’
~ email excerpt from Sandy Kozak, Investigator, CHRC to Arthur Topham, Pub/Ed of RadicalPress.com, Dec. 10, 2007
‘What kills a skunk is the publicity it gives itself.’
~ Abraham Lincoln
‘But when you want money for people with minds that hate,
All I can tell you brother is that you have to wait.’
~The Beatles, Revolution, 1968

Plainly stated Canada is a Zionist Jew-controlled colony of the state of Israel. In terms of the alternative media such a designation is referred to as a ‘ZOG’ nation, i.e. ‘Zionist Occupied Government.’ While hidden for over six decades from the majority of Canadians by the Zionist-controlled media’s ‘Iron Curtain’ of deception it is nonetheless an established fact and a reality that must be faced if the nation is to ever recover its former independence and sovereignty.
Anyone who desires to dispute this assertion has to explain and justify to the people of Canada why there is not a single federal political party in the country willing to stand up to the Zionist Jew lobby that now wields such a sinister political influence upon the nation. To attempt a negation of the argument without speaking to this issue can only be construed as evasion and denial.
In the thick of yet another federal election, with Harper and his Conservative party striving with utmost intent to gain a majority government, this pseudo-Semitic elephant in the midst of Canada’s political/judicial/cultural/social living room blithely goes about its business of knocking over, crushing and destroying the country’s constitutional rights along with trammeling upon its domestic and foreign policies, all the while aided and abetted in its traitorous actions by a colluding, fifth column ‘mainstream’ media; itself but another monopoly controlled weapon within the Zionist’s plethoric armory of subterfuge and deception.
History, once freed from the controlling machinations of the Zionist Jews and re-established upon the firm foundations of actual, factual truth, will one day support this seemingly radical view of Canada.
The overall subject of the Zionist Jew’s seditious back-room dealings within Canada’s political, social, cultural and economic infrastructure in favour of Israel and Zionism’s stated goal of creating a one world government is much too complex an issue to deal with in one short essay and, needs be, must be highlighted here by a focus on just one aspect of their sell-out of Canada’s sovereignty to the foreign interests of the state of Israel; that being the lobby’s relentless attack upon Canadians’ constitutional, God-given right to freedom of speech, especially as it pertains to the internet.
Over the past three decades and longer there has been a slow, steady, incremental, subversive process taking place within Canada’s federal judiciary designed to weave into the warp and woof of Canada’s Constitution Act, Charter of Rights and Freedoms and miscellaneous human rights acts, legislation that would at first appear benign and beneficial to the nation as a whole but ultimately, in the end, when push came to shove and the population began waking up to the fact that their country was being unduly influenced and coerced and manipulated by the Zionist Jews within its borders, this seemingly laudable legislation would suddenly shape shift into what it was originally designed to be: a set of draconian, totalitarian laws having one, and only one, purpose in mind: to protect and justify all of the insidious actions on the part of the federal government and its representatives that continually bring not only increased power and influence to the Zionist Jew lobbies themselves but foremost, to their official handler, the racist, supremacist, apartheid state of Israel. This, I submit, is and was the sole intention of the ‘human rights’ legislation here in Canada. Everything else related to the subject is subsidiary and mere window dressing to satisfy the gullible, the marginalized and the intelligentsia. It is a classic case of Zionism in action and also a reflection of the very same process used throughout the first half of the 20th century to gain, via similar subterfuge, the Arab lands now known as the ‘state of Israel’.
The rather graphic, controversial image above that accompanies this essay is meant to represent many of those players who are, in one way or another, secretly and subversively playing a role in undermining Canada’s sovereignty and allowing the Zionist Jews now residing within its borders to wield a level of undue influence that is quickly destroying Canada’s ability to stand in the world as an independent and sovereign nation. The results of this unhealthy and egregious relationship between the atheistic, criminal state of Israel are clearly portrayed in the bloody imagery symbolized by Harper’s appearance in the aforesaid humourless cartoon. Necessity, at this point in our history, and in the face of all that the Zionist-controlled media is doing to manipulate this realistic image of the Harper government and its Zionist controllers, justifies such an apparently raw, grotesque portrait of Canada’s Prime Minister. 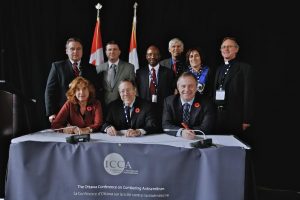