Counter Force: Deconstructing Jonathan Kay’s Lies Regarding the Design of the Protocols 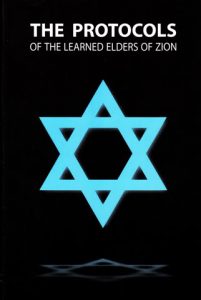 The attack on the Protocols in the 1920′s proved above all else the truth of their contention…
Probably so much money and energy were never before in history expended on the effort to suppress a single document.’
– Douglas Reed, The Controversy of Zion, (1956), P. 212
Methinks, as Shakespeare’s Hamlet once mused to himself, that Jonathan Kay, propagandist for the Zionist-controlled National Post and author of a new book on the origins of conspiracy theories, Warrant for Genocide, blueprint for Paranoia, protesteth too much when it comes to facing the inherent truths contained in the Jew’s revolutionary handbook better known as The Protocols of the Learned Elders of Zion.
Jonathan Kay
In yet another disingenuous attempt, via deceptive sophistry and outright lies designed to downplay the contents of the document first published in 1905 by Professor Sergyei Nilus, an official of the Department of Foreign Religions at Moscow, of which the British Museum in London has a copy bearing its date-stamp, August 10, 1906, Kay expends much too much rhetoric and feigned, forced irony doing his utmost to deceive and misguide a quickening population of globally aware citizens who, thanks to the internet, finally have access not only to the document itself but even more so, sufficient quantities of background data that reinforce beyond a shadow of a doubt the cold, harsh reality that this ongoing Jewish conspiracy to gain total control of the global infrastructure has been in the works since at least the time of its founding progenitor, Adam Weishaupt, the Jew who, on May 1st, 1775, officially created the secret society known to the world as the Illuminati.
Serge Nilus
Given the propensity of the Zionist Jews for deception (the guiding principle of their illegally obtained ‘state of Israel’ and their secret police intelligence service known as ‘Mossad’) it’s little wonder that Kay would immediately attempt to deflect the reader away from the true sources of this global conspiracy on to Theodor Herzl, the founder of the World Zionist Organization. To the unaware or as some might say, the uninitiated, who were never given the complete truth surrounding the founding of the Illuminati, this double deception of Kay’s might have a truthful or familiar ring to it but to those who have taken the time to research in depth the scope of this conspiracy against all humanity and the Earth, Kay’s cunning is as blatant, transparent and distastefully disgusting as the images of the charred remains of the Palestinian corpses burnt beyond recognition by the Israeli ‘Defense’ Force’s phosphorus bombing of Gaza during operation Cast Lead over the Christmas season of 2008-2009.
After having attempted, purposely and falsely, to associate the document with Herzl and then afterwards, with seemingly self-assumed wit and credibility, proclaiming the contents of the document to be but a ‘fairy tale;’ one that conveniently could also be used to indict Adolf Hitler and the German people, via the Jewish ploy of ‘guilt by association’, Kay shifts his thesis to what he hopes will be clinching, rock hard proof that such a ‘conspiracy theory’ actually had its origins elsewhere beyond any association with the Jews.