THANK YOU CANADA AND NATO: You Murdered My Precious Family 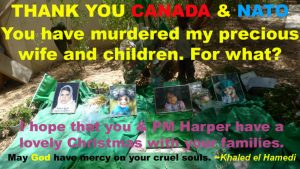 [EditorÃ¢â‚¬â„¢s Note: By the time I had put together all the photos, uploaded them and got the text of the article checked over I was pretty well exhausted and overcome emotionally and mentally by a gnawing, nauseating sense of the grossly sordid and evil nature of what Canadian has done to the innocent, gentle people of Libya. I have never felt so ashamed of my country in my entire 65 years of living here. The utter disgust and loathing that I now feel for Canadian Prime Minister Stephen Harper and all those MPs who voted to go along with the criminal, Zionist-controlled North Atlantic Terrorist Organization (NATO) agenda of war and destruction goes beyond any descriptive words that I could possibly dredge up from the darkest, foulest thesaurus in existence.
Harper’s actions, as the so-called Ã¢â‚¬Å‘leaderÃ¢â‚¬Â of this once semi-civilized nation, have so degraded the country in the eyes of the non-NATO world that I am literally embarrassed to call Canada my home any longer. Such absolute repugnance for another human being I never thought possible until the reality of what he and his governing party of psychopathic war criminals have done to the once prosperous and peaceful nation of Libya finally sunk in to my heart and mind.
I can only wonder and stand in awe and silence at the horrible intensity of grief that Khaled El Hamedi must feel knowing that his precious, loved, pregnant wife and his sweet, darling babies were all blow to pieces in a split second because of the monstrously evil and deliberately vile terrorist decisions of our elected officials in Ottawa. And I include every single one of those miserable excuses for members of parliament who never spoke out against Harper and his Zionist, boot-licking traitorous sycophants. 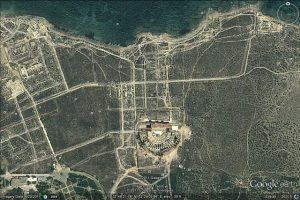 Every MP in Ottawa who didn’t have the courage and heart to vote against the decision to join NATO in its wanton killing spree stands accused of complicity in committing war crimes. Each and every one of them ought to be arrested and then given a fair and just trial and hopefully found guilty. And once convicted the whole worthless lot of them should either be strung up from the nearest and tallest tree available on Parliament Hill or else sent to Iraq or LibyaÃ‚Â or Afghanistan to spend the remainder of their destitute days doing penance by having to remove, bare handed, all the DU contaminated rubble now littering the landscape of those innocent nations!
This former nation of Ã¢â‚¬Å‘peacekeepersÃ¢â‚¬Â Canada has, thanks to the criminal insanity of the Harper Conservatives and their lackeys, plummeted to the lowest depths of demonic depravity ever and those responsible for this degeneracy deserve to be treated by all peace-loving, decent Canadians as a hostile, renegade, traitorous and alien power.
Never has this country ever had such a sick mind leading it. If Harper were a dog it would be time to put him out of his misery. ItÃ¢â‚¬â„¢s little wonder that he’s forever suck-holing and groveling at the feet of the leader of that racist, war-mongering shitty little piece of stolen real estate in the middle of Palestine called Ã¢â‚¬Å‘IsraelÃ¢â‚¬Â. Between himself and his unctuous, fat-assed side-kick Jason Kenney theyÃ¢â‚¬â„¢ve both managed to drag the (now) bloodstained country I once proudly called home down to the same gut-wrenching, nauseous level of savagery as the psychopaths from Tel Aviv.
At this point all I can say is WAKE UP CANADA! Wake up before this seditiously sick, Zionist-worshipping excuse for a human being destroys Canada once and for all. And yes, I know my words may appear to some unduly harsh but God knows they are all I have available at this point to voice the intense loathing for what this national disgrace has done to my former democratic, peace-loving nation. We once held in our hands a priceless pearl of beauty and now this traitor in Ottawa has thrown it to the swine of deception, greed, murder and destruction.]
thankyoucanada