Law And The New Fascism In Canada by Robin Mathews 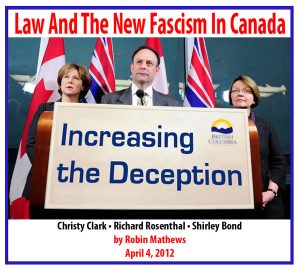 ‘The soiled and disgraceful history of the Ministry of the Attorney General of B.C. since 2001 is a faithful representation of the assault on the rule of law and on the integrity of democratic government in Canada in the first 12 years of the century.’
~ Robin Mathews
Many people in Canada have never heard of Shirley Bond, B.C.Ã¢â‚¬â„¢s Solicitor General, Minister of Public Safety, and Attorney General of the province. Nevertheless, she fits snugly into the new role of legislators Ã¢â‚¬â€œ to block any acts of responsibility to the electorate, to cover up violations of trust by government, to sham the relation between large corporations and the legislators Ã¢â‚¬Å‘ownedÃ¢â‚¬Â by the corporations.
She is presently insisting that her attempt to block the Auditor General from investigating all the circumstances of the Ã¢â‚¬Å‘unconventionalÃ¢â‚¬Â $6 million pay-out to Defence Counsel in the Basi, Virk, and Basi (BC Rail Scandal) case is a demonstration of her full and willing cooperation with the Auditor General.Ã‚Â Ms. Bond was Deputy Premier when the Ã¢â‚¬Å‘dealÃ¢â‚¬Â was made to chop the (unfinished) trial in order to prevent cross-examination of top politicos and corporate actors Ã¢â‚¬Â¦ and to pay the costs of the convicted men Ã¢â‚¬â€œ Dave Basi and Bobby Virk.
The Gordon Campbell/Christy Clark/Shirley Bond Liberal government will never get to the 2013 provincial election if the full story of the corrupt transfer of BC Rail to the CNR is told. Thus (I believe), we see Ms. BondÃ¢â‚¬â„¢s game of smoke and mirrors with law and with the integrity of the Ministry of the Attorney General.
The move in Canada Ã¢â‚¬â€œ and globally, to destroy the rule of law, to assail rights of collective bargaining, to kidnap ownership of nationally-owned resources by multi-national elites, to turn police forces into Ã¢â‚¬Å‘palace armiesÃ¢â‚¬Â, to debase the democratic election process, to hand governing to private interests, and to sell off and ship out the sources of worthwhile employment (the industrial base) Ã¢â‚¬â€œ has a number of names.
newchristiemisleaders
After the March 29th federal budget the Globe and Mail chose to call the move in Canada: Ã¢â‚¬Å‘HarperÃ¢â‚¬â„¢s modest revolutionÃ¢â‚¬Â. If the matter wasnÃ¢â‚¬â„¢t so serious, the GlobeÃ¢â‚¬â„¢s characterization would be laughable.Ã‚Â The Harper government (Air Canada, Postal Workers) has set about wrecking collective bargaining in Canada.Ã‚Â The Harper forces admitted guilt to an attempted rig of the 2006 election (which should have caused major criminal charges, and has not).
The Harper government has been a party to the highly dubious sell-off of STELCO to U.S. interests, and the closing down of ELECTRO-MOTIVE DIESEL by recently new owner CATERPILLAR Ã¢â‚¬â€œ after insulting the employees by offering them a 50% wage cut.Ã‚Â And shortly before sale, a $5 million tax grant went to the Corporation from the Harper government. [With what behind-the-scenes agreements??]Ã‚Â Expect more of the same under the Harper regime.
In the calculated and highly organized (alleged) Harper Party attempt to wreck the 2011 election through Robocall electronic tactics, another major attack was made upon the legitimacy of the election process in Canada.Ã‚Â All indications point to the Conservative Party and its supporters as the major, overwhelmingly involved force engaged in election-wrecking.Ã‚Â That must be said repeatedly. The bully-boy tactics of the people with organizations involved and by spokespeople for the Harper force in Parliament are intended, I believe, to stop Canadians from saying just that: every indication points to the Conservative Party and its supporters as creators of the latest attack upon the legitimacy of the election process in Canada.
In addition, using its proxy power in the Enbridge Corporation, the Harper forces are attacking freedom of assembly in Canada.Ã‚Â In the North yesterday, the Northern Gateway hearing was closed down because, apparently, Enbridge representatives were offended by a school teacher and pupils showing signs opposed to the Gateway development. Enbridge was trying to say that they will not engage with the population democratically.Ã‚Â They want militarized agreement with their corporate decisions. 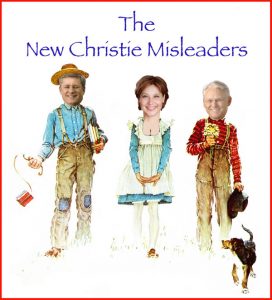