How Hitler defied the bankers 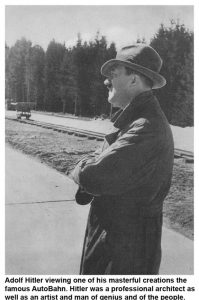 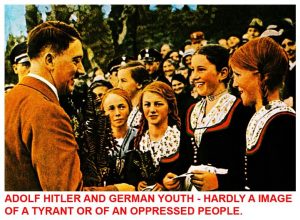 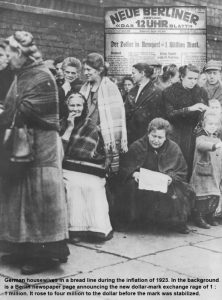 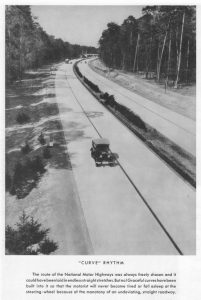 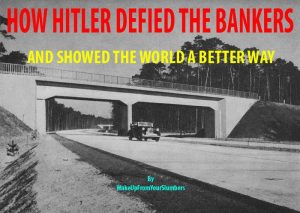 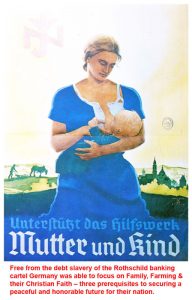 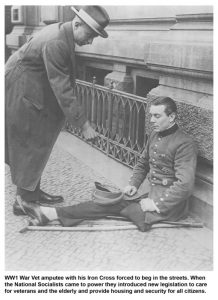 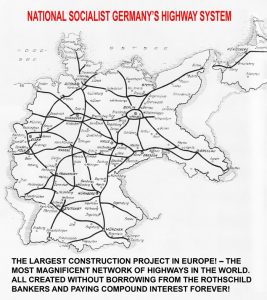 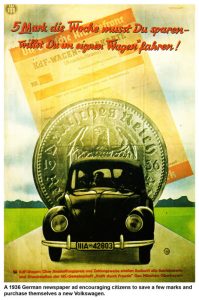 How Hitler defied the bankers

When we look at all the facts, the charge that “Jews financed Hitler” becomes irrelevant. Los Angeles Attorney Ellen Brown discusses this topic in her book Web Of Debt.

When Hitler came to power, Germany was hopelessly broke. The Treaty of Versailles had imposed crushing reparations on the German people, demanding that Germans repay every nation’s costs of the war. These costs totaled three times the value of all the property in Germany.

Private currency speculators caused the German mark to plummet, precipitating one of the worst runaway inflations in modern times. A wheelbarrow full of 100 billion-mark banknotes could not buy a loaf of bread. The national treasury was empty. Countless homes and farms were lost to speculators and to private (Jewish controlled) banks. Germans lived in hovels. They were starving.

Breadlines
Nothing like this had ever happened before – the total destruction of the national currency, plus the wiping out of people’s savings and businesses. On top of this came a global depression. Germany had no choice but to succumb to debt slavery under international (mainly Jewish) bankers until 1933, when the National Socialists came to power. At that point the German government thwarted the international banking cartels by issuing its own money. World Jewry responded by declaring a global boycott against Germany.

Hitler began a national credit program by devising a plan of public works that included flood control, repair of public buildings and private residences, and construction of new roads, bridges, canals, and port facilities. All these were paid for with money that no longer came from the private international bankers.

Volkswagen
The projected cost of these various programs was fixed at one billion units of the national currency. To pay for this, the German government (not the international bankers) issued bills of exchange, called Labor Treasury Certificates. In this way the National Socialists put millions of people to work, and paid them with Treasury Certificates.

Under the National Socialists, Germany’s money wasn’t backed by gold (which was owned by the international bankers). It was essentially a receipt for labor and materials delivered to the government. Hitler said, “For every mark issued, we required the equivalent of a mark’s worth of work done, or goods produced.” The government paid workers in Certificates. Workers spent those Certificates on other goods and services, thus creating more jobs for more people. In this way the German people climbed out of the crushing debt imposed on them by the international bankers.

AHyouth
Within two years, the unemployment problem had been solved, and Germany was back on its feet. It had a solid, stable currency, with no debt, and no inflation, at a time when millions of people in the United States and other Western countries (controlled by international bankers) were still out of work. Within five years, Germany went from the poorest nation in Europe to the richest.

family
Germany even managed to restore foreign trade, despite the international bankers’ denial of foreign credit to Germany, and despite the global boycott by Jewish-owned industries. Germany succeeded in this by exchanging equipment and commodities directly with other countries, using a barter system that cut the bankers out of the picture. Germany flourished, since barter eliminates national debt and trade deficits. (Venezuela does the same thing today when it trades oil for commodities, plus medical help, and so on. Hence the bankers are trying to squeeze Venezuela.)

amputee
Germany’s economic freedom was short-lived; but it left several monuments, including the famous Autobahn, the world’s first extensive superhighway.

(Schacht, the Rothschild agent, actually supported the private international bankers against Germany, and was rewarded by having all charges against him dropped at the Nuremberg trials.)

This economic freedom made Hitler extremely popular with the German people. Germany was rescued from English economic theory, which says that all currency must be borrowed against the gold owned by a private and secretive banking cartel — such as the Federal Reserve, or the Central Bank of Europe — rather than issued by the government for the benefit of the people.

Canadian researcher Dr. Henry Makow (who is Jewish himself) says the main reason why the bankers arranged for a world war against Germany was that Hitler sidestepped the bankers by creating his own money, thereby freeing the German people. Worse, this freedom and prosperity threatened to spread to other nations. Hitler had to be stopped!

Makow quotes from the 1938 interrogation of C. G. Rakovsky, one of the founders of Soviet Bolshevism and a Trotsky intimate. Rakovsky was tried in show trials in the USSR under Stalin. According to Rakovsky, Hitler was at first funded by the international bankers, through the bankers’ agent Hjalmar Schacht. The bankers financed Hitler in order to control Stalin, who had usurped power from their agent Trotsky. Then Hitler became an even bigger threat than Stalin when Hitler started printing his own money.

“Hitler took over the privilege of manufacturing money, and not only physical moneys, but also financial ones. He took over the machinery of falsification and put it to work for the benefit of the people. Can you possibly imagine what would have come if this had infected a number of other states? (Henry Makow, “Hitler Did Not Want War,” www.savethemales.com March 21, 2004).

“The Nazis came to power in 1933 when the German economy was in total collapse, with ruinous war-reparation obligations and zero prospects for foreign investment or credit. Through an independent monetary policy of sovereign credit and a full-employment public-works program, the Third Reich was able to turn a bankrupt Germany, stripped of overseas colonies, into the strongest economy in Europe within four years, even before armament spending began. (Henry C. K. Liu, “Nazism and the German Economic Miracle,” Asia Times (May 24, 2005).

In Billions for the Bankers, Debts for the People (1984), Sheldon Emry commented:

“Germany issued debt-free and interest-free money from 1935 on, which accounts for Germany’s startling rise from the depression to a world power in five years. The German government financed its entire operations from 1935 to 1945 without gold, and without debt. It took the entire Capitalist and Communist world to destroy the German revolution, and bring Europe back under the heel of the Bankers.”

These facts do not appear in any textbooks today, since Jews own most publishing companies. What does appear is the disastrous runaway inflation suffered in 1923 by the Weimar Republic, which governed Germany from 1919 to 1933. Today’s textbooks use this inflation to twist truth into its opposite. They cite the radical devaluation of the German mark as an example of what goes wrong when governments print their own money, rather than borrow it from private cartels.

In reality, the Weimar financial crisis began with the impossible reparations payments imposed at the Treaty of Versailles. Hjalmar Schacht, the Rothschild agent who was currency commissioner for the Republic — opposed letting the German government print its own money… “The Treaty of Versailles is a model of ingenious measures for the economic destruction of Germany. Germany could not find any way of holding its head above the water, other than by the inflationary expedient of printing bank notes.”

Schacht echoes the textbook lie that Weimar inflation was caused when the German government printed its own money. However, in his 1967 book The Magic of Money, Schacht let the cat out of the bag by revealing that it was the PRIVATELY-OWNED Reichsbank, not the German government, that was pumping new currency into the economy. Thus, the PRIVATE BANK caused the Weimar hyper-inflation.

Like the U.S. Federal Reserve, the Reichsbank was overseen by appointed government officials, but was operated for private gain. What drove the wartime inflation into hyperinflation was speculation by foreign investors, who sold the mark short, betting on its decreasing value. In the manipulative device known as the short sale, speculators borrow something they don’t own, sell it, and then “cover” by buying it back at the lower price.

Speculation in the German mark was made possible because the PRIVATELY OWNED Reichsbank (not yet under Nazi control) made massive amounts of currency available for borrowing. This currency, like U.S. currency today, was created with accounting entries on the bank’s books. Then the funny-money was lent at compound interest. When the Reichsbank could not keep up with the voracious demand for marks, other private banks were allowed to create marks out of nothing, and to lend them at interest. The result was runaway debt and inflation.

Thus, according to Schacht himself, the German government did not cause the Weimar hyperinflation. On the contrary, the government (under the National Socialists) got hyperinflation under control. The National Socialists put the Reichsbank under strict government regulation, and took prompt corrective measures to eliminate foreign speculation. One of those measures was to eliminate easy access to funny-money loans from private banks. Then Hitler got Germany back on its feet by having the public government issue Treasury Certificates.

Schacht , the Rothschild agent, disapproved of this government fiat money, and wound up getting fired as head of the Reichsbank when he refused to issue it. Nonetheless, he acknowledged in his later memoirs that allowing the government to issue the money it needed did not produce the price inflation predicted by classical economic theory, which says that currency must be borrowed from private cartels.

What causes hyper-inflation is uncontrolled speculation. When speculation is coupled with debt (owed to private banking cartels) the result is disaster. On the other hand, when a government issues currency in carefully measured ways, it causes supply and demand to increase together, leaving prices unaffected. Hence there is no inflation, no debt, no unemployment, and no need for income taxes.

Naturally this terrifies the bankers, since it eliminates their powers. It also terrifies Jews, since their control of banking allows them to buy the media, the government, and everything else.

Therefore, to those who delight in saying “Jews financed Hitler,” I ask that they please look at all the facts.