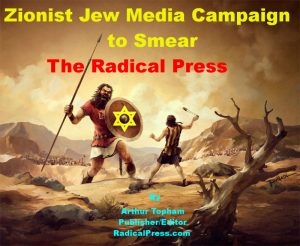 ‘Someday, someone, somewhere, is going to break that silence and only then will we begin to hear the sounds of balanced media coverage finally rising above what Solzhenitsyn described as ‘the incessant dinning of slogans and dogmas that abolish the human essence and deny all individuality to man.’ Then, and only then, will the silence of the wolves begin to disperse as the clear light of a new day of freedom of speech dawns for all Canadians.’
Arthur Topham, Silence of the Wolves, July 16, 2009
Early beginnings
It’s been ongoing since the day I first openly criticized the Zionist Jews and their political dogma or ideology known as Zionism. That was back during the heady last days of the 20th Century when I was publishing my monthly hard copy edition of The Radical, an alternative tabloid which ran for forty-two consecutive editions ending in June of 2002.
Throughout most of my tenure as Publisher and Editor of The Radical I was basically ignorant of the Zionist agenda and didn’t begin to clue into what it was all about until after reading the writings of the Jewish intellectual Noam Chomsky, in particular his account of the Middle East situation contained in his book, The Fateful Triangle Israel, the United States, and the Palestinians. After digesting Chomsky’s account of Israel and who is controlling it and its ideological base I began to pay more and more attention to this issue as time went on.
Of course being a radical alternative publisher with an eclectic sense of what is news and what is b.s. I soon attracted a lot of unwanted attention from what one might call the ‘Left’ in Canada’s political circles. At first it was rather odd as I had always thought of myself as a lefty. My father had been a strong supporter of both the CCF and the NDP throughout most of his life and my paternal grandfather had actually been a good friend of Tommy Douglas’s back when Tommy was still working as a minister of the church in Saskatchewan back in the 1930s.
Anyhow, Canadian Dimension magazine at one point did a major smear edition on myself, The Radical and another alternative newspaper back in January of 2001 that finally established the fact that the so-called ‘Left’ in Canada was in fact riddled with people who were died in the wool Marxists and Communists and stalwart supporters of Zionism and the Jewish state of Israel. Anyone else in the movement who wasn’t was labelled ‘right wing’ or an ‘anti-Semite’ or some other unsavoury epithet.
It was at this period of my life that I first met Paul Fromm, the feisty spokesperson for the Canadian Association for Free Expression (CAFE) and began publishing occasional articles that he had penned. I was also covering the whole issue with Wiebo Ludwig and his Trickle Creek Christian Community and their ongoing battles with the Oil and Gas Industry in Alberta and publishing the early writings of controversial speaker and author David Icke.
Those familiar with David Icke will likely be aware that he too was attacked and smeared by this same chronic complainer Ricardo Warmouse who has been attacking me and my website since at least 2007. David still has articles on Warmouse posted on his website www.davidicke.com .
NDP government takes Radical Press to court
Eventually I ended up in B.C.Supreme Court in 2002 after exposing the dubious character of a former NDP MLA appointed by the Dosanjh government who had been given the portfolio for the Ministry of Children and Families all the while staving off continuous allegation by his many detractors that he had been involved in drug running, child pornography and worse. This same individual is now the Chief Red Apple for the First Nations Summit here in British Columbia and his name is Edward John. 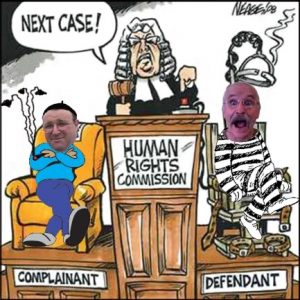