Two Gulags: A second warning to the West by Arthur Topham

‘I understand that you love freedom, but in our crowded world you have to pay a tax for freedom.
You cannot love freedom for yourselves alone and quietly agree to a situation where the majority
of humanity, spread over the greater part of the globe, is subjected to violence and oppression.
‘The Communist ideology is to destroy your social order. This has been their aim for 125 years and
it has never changed; only the methods have changed a little….And what is ideological war? It is a
concentration of hatred, a continued repetition of the oath to destroy the Western world.’
~Aleksandr I. Solzhenitsyn, from a Speech given in New York City to the AFL-CIO on July 9, 1975
and contained in his book, Warning to the West.
Permit me to begin this essay by stating that in comparing the case of Arthur Topham and RadicalPress.com versus Regina (the ‘Crown’ aka B’nai Brith Canada) to that of the trials and sufferings of former Nobel Peace prize winner Aleksandr I. Solzhenitsyn, I am fully aware that it will naturally be construed by some readers as little more than hyperbole on the part of the writer. Nonetheless there are a number of historic lay lines connecting the two situations which need identification in the hope that others will see and understand the systematic progression and transformation of this climacteric element of tyranny that’s been stalking the global landscape since the successful Bolshevik coup of 1917 in Russia.
First I would like to add to Solzhenitsyn’s words where he states that Communism’s ideology aim has not changed from the start, only the ‘methods’ have. This simple statement, for those of my generation and later generations, is indispensable when attempting to comprehend how the ideology itself has managed to retain its essential character even after the downfall in 1989 of the Union of Soviet Socialist Republics (USSR).
Key to visualizing the doctrinal strands of the Communist ideology and their continual ability to unobtrusively weave themselves in and out of the ever-changing warp and woof of day to day history is the possession of a fundamental awareness that today’s political ideology, Zionism, is precisely the same ideology that first gave birth to its historic pedigree Marxism in the mid-19th Century its founding and funding has, from day one, flowed from the same source.
Today, those who have been paying attention to the details in the Zionist script for the creation of a one world totalitarian dictatorship understand that there is a direct connection between the House of Rothschild, the political ideology known Zionism and the premeditated, deliberate, illegal creation of the state of Israel by the United Nations back in 1948. These ideas thrash about like a load of dirty underwear in an automatic washer on most alternative blogs dealing with political issues as well as in a myriad number of posts on Facebook and other internet forums and venues. So many viewers have peered through that revolving window that now (as compared to even a decade ago when the Internet was in its nascent beginnings) the Rothschild = Zionism = Israel connection is a done deal and recognized as fact. But what is not fully understood yet by this vast number of viewers is the underlying, direct relationship between Communism and Zionism, without which the world will continue to disconnect the two apparently differing ideologies and fail to grasp the crucial historic continuity of this longstanding conspiracy; one meant to destroy the West and bring to fruition the ultimate goal of the Communist creed world slavery under an all powerful Rothschild oligarchy. 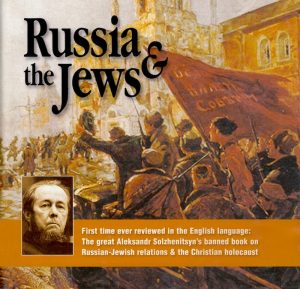 The genius that was Aleksandr Solzhenitsyn knew his enemy well enough that he was able, upon finally having his eleven year sentence in the Soviet gulag annulled in April of 1956, to actually have his first novel, One Day in the Life of Ivan Denisovich, published in Krushchev’s soviet union in 1962. His earlier works that included The First Circle and Cancer Ward were first published in English in 1968 and by 1970 had earned him the Nobel Prize for literature. It wasn’t until 1974 though that Solzhenitsyn was finally arrested again and expelled from the Soviet Union after a copy of his Gulag was seized by the KGB in December of 1973. He first moved to West Germany and then to Vermont in the USA where he remained until returning permanently to Russia in 1994.
Solzhenitsyn’s classic work The Gulag Archipelago was first published in English and French in June of 1974 and remains the literary lynchpin holding together the ultimate hidden knowledge regarding the cogent connection between Marxism, the supposed ‘Russian’ Revolution, Communism, Bolshevism and Zionism and their direct tie to the Rothschild oligarchy alluded to earlier.
Solzhenitsyn was able to accomplish this monumental feat of delivering to the West the evidence merely by omission. His trilogy of terror (the Gulag), which outlines the subsequent premeditated, calculated mass genocide of approximately 66 million Russians, mostly of Christian denomination, from the coup of 1917 up until Krushchev was deposed in 1964, will stand forever as the single most important work ever written on the actualizing and unfolding of Zionism’s essential tenets in a real life situation where a vast nation fell under the full control and domination of its ideological proponents.
He was able to have it published and promoted in the West by simply omitting to identify the vast majority of all the key players in his epic drama of demonic destruction as being of Ashkenazi Jewish origins. In this way he avoided the West’s Zionist press that controls all the major publishing houses throughout Europe and North America who, had he pin-pointed the true ethnic identity of the rogues and criminals and sadistic, psychopathic killers who were directly responsible for this mass murder of the Russian people (including all of Tzar Nicholas II’s family and even the family dog!), would have outright shunned him and his work and in all likelihood initiated a smear campaign against him that would have included all the same tactics now being employed by the Zionist controlled media here in Canada to attack my own person and my website RadicalPress.com.
Upon his return to the Russian republic in the mid 1990’s Solzhenitsyn resumed work on another two volume set of books entitled Two Hundred Years Together, the history of the Jews in Russia. The first volume was called Russian Jewish History 1795-1916 and when published created such a stink within Zionist circles that when volume two, The Jews in the Soviet Union came out in Russia the West was then on to him and the book was never published in the English language and still remains censored by the Jewish media to this day, a prime example of the power of the Zionist media to cover up their endless crimes against humanity.