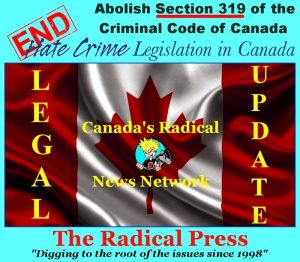 Dear Supporters of Freedom of Speech,
January 3, 2013 was a good day in B.C. and across the nation for those who have taken up metaphorical arms in defence of Canada’s fundamental right to freedom of speech on the Internet.
Here in B.C. and out in Ontario those battling against the forces of media censorship and repression were, in both cases, successful in their efforts and thus, for once, I have only positive news to report.
I should preface this update with a short apology to some readers who were sent an alert yesterday indicating that I had unexpectedly been called to court. That was an error on my part due to some confusion arising from the previous bail hearing that took place on December 19, 2012 wherein I got the date for my next appearance mixed up. Call it a senior moment if you will. 🙂
During the last court appearance in December presiding Judge Church, after hearing arguments from both the Crown and Defence regarding the Crown’s rather strident and persistent effort to reimpose the original bail conditions that were placed on me by Cst. Terry Wilson of the BC HATE CRIME TEAM back on May 16, 2012, reserved her judgement on the issue until January 3, 2013.
My lawyer Doug Christie attended by telephone from Victoria, B.C. and I and my wife were in the Quesnel Court room at 1:30 p.m. to hear Judge Church’s decision.
The Judge first gave an overview of the Crown’s arguments and those of Defence lawyer Mr. Christie before presenting her own position on the issue. According to Judge Church the Crown’s basic argument was that while I had legally resumed publishing on RadicalPress.com on November 2, 2012 I was still publishing material that the Crown felt was of the same calibre as that originally complained of by Agent X and Agent Y of B’nai Brith Canada. To back up Crown’s argument Crown Council Jennifer Johnston had submitted to Judge Church on December 19, 2012 a couple of screen shots taken from the radicalpress.com website that had supposed controversial headings which CC Johnston felt were significant enough that they warranted reinstating the original draconian restrictions that Cst Terry Wilson had unilaterally saddled me with on the day of my arrest in May. 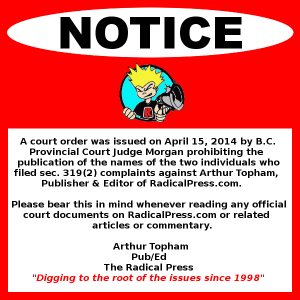