Freedom of Speech by Arthur Topham 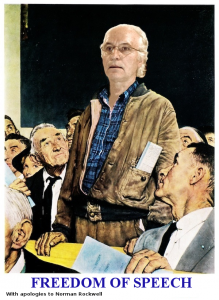 Dear Free Speech Supporter,
To succinctly summarize the importance and meaning of freedom of speech is no small task. I have laboured on this short essay for many an hour trying to distil the essence down to where it might become 100% proof and with the light of a match burst into a flame of truth bright enough to expose the underlying deception that now exists in Canadian law with respect to this subject.
Please take the time to read it and ponder its implications and should the import of its plea hold meaning for you pass it along to others who you may feel could also benefit from reading it.
It was obviously written in my own defence but I’m hopeful that upon understanding all the implications of these unjust laws that you will be able to see the danger to all Canadians who value this crucial right.
Sincerely
Arthur Topham
Publisher & Editor
The Radical Press
‘Digging to the root of the issues since 1998’
Freedom of Speech
by Arthur Topham
‘There’s no such thing as ‘Hate Speech.’
You either have FREE speech or you don’t it’s that simple.’
~Anonymous

NOTE: The struggle to retain our inherent right to freedom of speech doesn’t come without costs both financially and otherwise. Out of necessity, I am forced to ask for financial assistance in this ongoing battle with the foreign interest censors who are determined to stop all freedom of expression in Canada.
Please help out with my upcoming Sec. 319(2) ‘Hate Propaganda’ trial in October by making a donation.
Donations can be made online via my GoGetFunding site located at http://gogetfunding.com/canadian-publisher-faces-jail-for-political-writings/ or else by sending cash, cheques or Money Orders to the following postal address.
Please make sure that any cheques or Money Orders are made out to Arthur Topham and sent to:
Arthur Topham
4633 Barkerville Highway
Quesnel, B.C.
V2J 6T8
Sincerely,
Arthur Topham