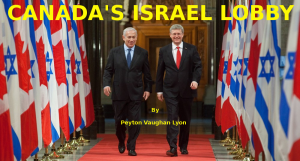 This article is an update of a study of the Canada Israel Committee (CIC) published in the Journal of Canadian Studies, 1992-3. It benefited by extensive comments from Professors John Sigler, Joseph Debanné, David Farr and Diana Ralph, and Rt. Hon Robert Stanfield, Ian Watson, and Bahija Reghai. I have discussed the Israel Lobby with about 20 foreign affairs officials, 2 former Prime Ministers, 3 former Secretaries of State for External Affairs, 8 Members of Parliament, 6 Senators, and 3 officials of the Canada-Israel Committee.
March 2010
Dr. Lyon is Professor Emeritus Political Science, Carleton University. He was a Rhodes Scholar, and obtained his D.Phil. from Oxford University. He served in the RCAF from 1940 to 1945.
He held posts as Foreign Service Officer, Department of External Affairs in Ottawa, Canada and in Bonn, Germany. He is the author of five books on Canadian foreign policy, trade and defence.