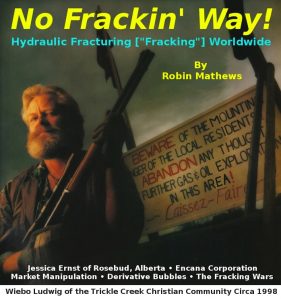 Hydraulic Fracturing [‘Fracking’] Worldwide.
Jessica Ernst of Rosebud, Alberta. Encana Corporation. Market Manipulation. Derivative Bubbles and The Fracking Wars.
By Robin Mathews
[email protected]
April 26, 2013
They merge. They interpenetrate. The thread of one weaves into the fabric of the others. ‘Fracking’ operations rush past law, past regulation, past health and environmental concerns. Supporters of ‘quick cash’, gas ‘futures’ pass corporate-written law to silence land-owners, elected councils, voters … you and me.
Narrowly ‘fracking’ legislation and regulatory behaviour push aside, silence anyone questioning a dangerous procedure. Broadly they strip away the Rule of Law, disenfranchise populations, ‘despotize’ governments.
In Alberta, Stephen Harper, Alison Redford, Encana Corporation, the newly appointed Alberta Regulator Gerard Protti (enforcing newly written law), and so far The Alberta Court of Queen’s Bench Chief Justice Neil Wittmann all merge … interpenetrate to hold off remedial action to create toxic law, toxic wealth, toxic environment.
People waken worldwide and begin to battle corporations, ‘regulators’, police forces, legislatures, courts the dominators determined to engage in ‘unconventional drilling’ (hydraulic fracturing, ‘fracking’). Conflict on the subject continues. France (2011) Bulgaria (2012), and Tunisia have banned hydraulic fracturing (‘fracking’). It continues in Australia, Canada, China, Denmark, Ireland, Netherlands, Poland, the U.S.A., and more.
Hydraulic Fracturing is the intensive assault on shale, and coal beds, through multiple well bores (often invading water tables) to release marketable gas. ‘Fracking’ uses giant amounts of sand, water, toxic chemical-mixes near the surface or miles down to fracture strata ‘fracking’ for marketable gas.
FrackinWomen
Said to be ‘old hat’ (sixty years old), present hydraulic fracturing to release marketable natural gas has new aspects and possesses multiple knowns and unknowns. Hyper-industrialization of agrarian sites: outcomes unknown. Increased earthquake activity: recorded. Unforeseen ‘leak gas’ explosions: recorded. Increased cancer incidence close to oil and gas wells: measured. Ground water sources polluted: common, but extent and health effects unknown. Water Tables lowered: unpredictable but occurring. ‘Migration’/leaks of gases over time: unpredictable but certain and increasingly frequent. Toxic effects on water, soil, animal life, human health: certain, unregulated, largely unresearched, information repressed.
FarmerLady
The commonly named ‘radioactive threat’ is only now starting to be researched. A. Rich, E.C. Crosby, University of Texas [New Solutions, Vol. 23 (1), 117-135, 2013] reveal (in layman’s language) that a cocktail of radioactive agents are set free especially by ‘unconventional’ (‘fracking’) gas operations. Radioactive agents are found in depositories [sludge storage, waste pits, storage pools] AND in the land no longer used for those purposes.
‘Out of Control: Nova Scotia’s Experience with Fracking for Shale Gas’, Report Summary, April 2013’ reports that from the few test wells undertaken radioactive materials were found to be present ‘only several years after drilling and disposal of some of the waste….’ (p. 4)
Jessica Ernst (Rosebud, Alberta) reports that sludge from fracking operations is spread on agricultural lands in Alberta.
JessicaErnstRosebud
In Alberta, (using Joyce Nelson’s words) ‘the government has introduced draconian legislation (Bill 2) that would strip landowners and others of their right to object to any energy project that would adversely and directly affect them.’ (Watershed Sentinel, Jan-Feb, 2013) The determined action envisioned in Bill 2 is doubtless a response to Jessica Ernst’s $33 million lawsuit against Encana Corporation and Alberta’s regulator. And so one may conclude is the switching of judges on her case. And so is, one may conclude, (what I would call) the concerted delay engaged in by Chief Justice of the Alberta Court of Queen’s Bench, Neil Wittmann. He is the highly dubious present judge on the Jessica Ernst case.
Something is seriously wrong in Canada. And globally. Evidence is mounting of real, multiple dangers in hydraulic fracturing. Legislatures should be restraining, researching, proving, regulating … preventing … at high speed. But legislatures, joining with corporations, courts, security forces are often deregulating, erasing evidence, punishing protesters, repressing criticism.
The whole operation world-wide is so dangerous, so untested, so irresponsible, so despotic, that reasons have to be available for largely unresearched, unregulated hydraulic fracturing in the face of its perils.
And reasons are available.
First. Think of Wiebo Ludwig (1941-2012) of Trickle Creek farm, Peace River, Alberta, fighting ‘Sour Gas’ fracking. Sour gas ‘a potent neurotoxin, has left a legacy of death and destruction….’ (Andrew Nikiforuk). Think of the attacks on Sour Gas operations around Trickle Creek. Think of the millions of dollars spent to investigate the attacks on Sour Gas fracking around Trickle Creek.

SourGaspic600 3
Think of the threats and attacks in B.C. near Chetwyn against Encana Corporation operations and the millions of dollars spent to investigate.
Think of the RCMP/Encana Corporation, alleged to have created a ‘false flag’ and blowing up an Encana well site to spur on distress no charges laid. Then think of the millions of dollars spent to investigate, charge, jail, and reinvestigate Wiebo Ludwig. One example of many: ‘RCMP conducted a four-day [fruitless] search of Trickle Creek (2010) involving over a hundred RCMP officers.’ (Wikipedia)
Think of Wiebo Ludwig (but do not speak of him). Think of him driven to desperation by Sour Gas fracking. (But do not speak of him.) Think of his repeated (unanswered) pleas to Alberta government for regulation, for research, inquiry, and investigation of hydraulic fracturing. (But do not speak of him or risk being accused of sympathizing with lawlessness, terrorist activity.)
Who will speak of the terrorism of Alison Redford, Stephen Harper, Encana Corporation, Gerard Protti and the Alberta Regulators, legislators of Alberta, and so far of Neil Wittmann, Chief Justice of the Alberta Court of Queen’s Bench in openly, or tacitly, or passively accepting and/or furthering what many believe is a ruthless attack on the health, the well-being, the security, the privacy, the property, and the reasonable tranquility of honest, law-abiding, innocent Albertans?
JessicaFirewaterUntitled 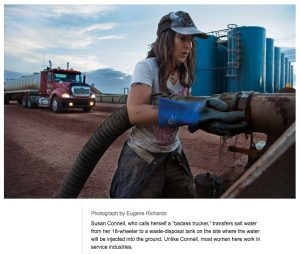 Alberta may be seen as a poster-location for the kinds of violation named above. But in various ways such invasions are happening widely on the planet. And there is a reason.
LSE professor Lord (Nicholas) Stern and thinktank Carbon Tracker state in a recent Report noted by Damian Carrington in The Guardian (Apr. 19, 2013) that instead of ‘reducing efforts to develop fossil fuels, the top 200 companies spent $674bn…in 2012 to find and exploit more….’ That is about the sum named in a 2006 report that would ‘pay for a transition to a clean and sustainable economy’.
Stock markets ‘are betting on countries’ inaction on climate change’, the Report says. Stock markets are creating a Carbon Bubble not unlike the massive mortgage/derivatives/fake credit scandal of 2008. ‘If all goes well’ I say countries will insist on internationally agreed Climate Change targets, and the ‘Carbon Bubble’ will burst because of over-valuation of oil, coal, and gas reserves held by fossil fuel companies. If all does not go well Climate Change will ramp up beyond control.
It may be fair to say the same kinds of ‘investors’ are engaged in the present Carbon Bubble as were engaged in the 2008 blow-up … criminally irresponsible people willing to cause any kinds of destruction in their drive for wealth. The whole fossil fuels Bubble is being driven by greed … by big, irresponsible money.
To meet only present agreed Climate Change targets, it is estimated that at least two-thirds of present so-called fossil fuel ‘reserves’ will have to remain unexploited. But … instead of diminishing the push presently going on for hydraulic fracturing (‘fracking’), it will probably intensify the push. As long as the pollutions created by hydraulic fracturing, by the huge environmental disruptions involved in its activities, and by the waste dumps it creates as long as they aren’t registered by the present ‘Climate Change/global warming’ regulation machineries, the obviously destructive and dirty activity will be called ‘clean’.
Pumps&Swings
(But science knows the methane gas leaking and leaking into the environment (almost unmeasured and unrecorded) from oil and gas operations is a potent climate changer! Methane is said to be 25 times more potent in relation to Climate Change than carbon dioxide. Who will bell the leaking methane cat?)
Redneck and Redford governments in Ottawa and Alberta (and elsewhere in the world) will attempt to criminalize any who resist ‘unconventional gas drilling’ (‘fracking’). They will provide aid and comfort to corporations like Encana Corporation, and they will work to undermine courts seeking just adjudication of disputes about injury done from hydraulic fracturing. They will do what they can to push for Liquid Natural Gas pipelines hoping that a Climate Change clampdown on conventional extractions will raise prices on Hydraulically Fractured Gas.
Here is huge field for environmentalists, many of whom are already engaged in the gigantic task of revealing that however it may (or may not) register on Climate Change measuring devices the pollution from unconventional gas drilling (hydraulic fracturing, ‘fracking’) is a very, very Dirty Wildcat. Out of (seemingly) nowhere, in the last twenty years at most, one of the dirtiest ‘mining’ operations in history has come into play and into visibility.
The more governments like the Redneck government in Ottawa and the Redford government in Alberta are absorbed into private corporate operations and dictated to by those corporations, the more they will resist just demands by citizens and populations for regulation.
The fight is worth it. The outcome certain. People all over the globe will not, ultimately, permit huge corporations and huge governments to desecrate the planet. ‘The bigger they are’, remember, ‘the harder they fall.’