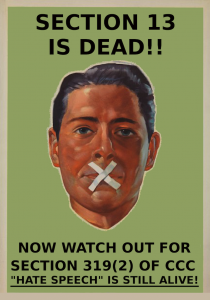 Dear Free Speech Supporters,
It certainly is encouraging news to hear that the Senate has finally passed third-reading on Bill C-304 and put the draconian Big Brother Section 13 of the Canadian Human Rights Act out of its misery once and for all.
My heart goes out to all of those Canadians who have suffered under this Bolshevik-inspired Orwellian piece of legislation planted in the Canadian Human Rights Act by the Zionist Jew lobbies here in Canada in order to censor and silence any deserved criticism of both the rogue state of Israel and its racist, supremacist ideology known as Zionism. Too many Canadians have been forced and coerced over the past quarter century or longer to suffer extreme stress and duress at the hands of those within the ‘Human Rights’ commissions and and tribunals who treated anyone accused of these so-called ‘hate crimes’ with utter disdain and dragged them through the equivalent of the Soviet Stalinist ‘Show Trials’ convicting everyone and forcing many to pay exorbitant fines plus imposing bans on their right to express themselves on the Internet and elsewhere.
What we now need to see is some form of restitution paid to all the victims and an apology from the federal and provincial governments for having treated their citizens in such a shabby, dictatorial fashion for so long.
We can only hope and pray that now that this repressive Stalinist law is a dead duck that more Canadians will find the courage and the will to speak out about the undue influence that these foreign lobbyist organizations are having on our legal and social structures not to mention our foreign policies and the environment degradation that increases with each passing day.
The only avenue available now for these same control-freak forces who have relied on section 13 to stop open discussion of Israeli war crimes and Zionist involvement within the media, government, banking and corporations will be to charge Canadians under section 319(2) of the Canadian Criminal Code, the very same section that the two complainants used in order to have me arrested back on May 16th, 2012 and charged with willfully promoting hatred against ‘people of the Jewish religion or ethnic group’. This will undoubtedly make it a much tougher row for the Zionists to hoe given the stringent conditions currently in place in the Criminal Code that allow for various defences, including speaking the TRUTH.
For today though let’s raise a cup and give a toast to the Conservative government for having done what neither the Liberals nor the NDP would ever have ventured to do.
Sincerely
Arthur Topham
Publisher & Editor
The Radical Press
‘Digging to the root of the issues since 1998’
_____________________________________
Screen Shot 2013-06-27 at 9.22.49 AM
http://blog.freedomsite.org/2013/06/section-13-has-been-repealed-media.html
http://canadianhumanrightscommission.blogspot.ca/2013/06/section-13-has-been-repealed-media.html

Yesterday, the Senate of Canada passed Conservative MP’s Private Members Bill Bill C-304, which repeals the notorious censorship provision, Section 13 of the Canadian ‘Human Rights’ Act. Late last night, the Bill became law and received Royal Assent. As of today, there will never be a new Section 13 complaint ever again! The outstanding Section 13 cases have just won a huge battle, but the war is not yet over.
Section 13 makes it an offence to ‘likely’ ‘expose’ privileged groups to ‘hatred and/or contempt.’ There are NO defences under Section 13! Even truth and intent are considered irrelevant to a finding of discrimination. The law was enacted in 1977 in order to silence a man named John Ross Taylor for messages he recorded onto his telephone answering machine. In the intervening 32 years, not a single person who has been hauled up on Section 13 charges has ever been acquitted a 100% conviction rate. Section 13 has been used and abused since its inception.
Testimony on Bill C-304
Several people testified on June 25, 2013 before the Standing Senate Committee on Human Rights. Most of the testimony was nauseating and not worth spending a second watching. But there were two stand outs, which are worth watching.
First is the presentation by Cara Zwibel of the Canadian Civil Liberties Association. The CCLA supports a repeal of Section 13 and Cara Zwibel testifies about freedom of expression and why it is so important in Canada.
Screen Shot 2013-06-27 at 9.52.10 AM
CLICK HERE TO VIEW VIDEO: http://youtu.be/aLCqPNax56o
The second is a very short clip of Professor Richard Moon talking about Mark Steyn and the Macleans case. His comments on Mark Steyn and linking him to Anders Breivik are something else. Readers might remember Richard Moon as the CHRC’s hand-picked ‘expert’ on Section 13 who submitted a report which called for a repeal of Section 13 (then he disappeared with his $50,000 cheque). Of course the CHRC immediately dumped his report and pulled a ‘mulligan’ to produce a report that said exactly what they wanted.
Screen Shot 2013-06-27 at 9.52.32 AM
CLICK HERE TO WATCH VIDEO: http://youtu.be/j-_z5bx8UaM
Media Coverage
Screen Shot 2013-06-27 at 10.01.14 AM
http://www.sunnewsnetwork.ca/sunnews/politics/archives/2013/06/20130626-184219.html
DAVID AKIN | PARLIAMENTARY BUREAU CHIEF
OTTAWA An Alberta MP has succeeded in his bid to repeal a section of the Canadian Human Rights Act long seen by free-speech advocates as a tool to squelch dissenting opinions.
Conservative MP Brian Storseth saw the Senate give third and final reading late Wednesday to his Bill C-304 which repeals Section 13 of the Human Rights Act, an act that had been used to, among other things, attack the writings of Sun News Network’s Ezra Levant and Maclean’s columnist Mark Steyn.
Section 13 ostensibly banned hate speech on the Internet and left it up to the quasi-judicial human rights commission to determine what qualified as ‘hate speech.’
But, unlike a court, there was no presumption of innocence of those accused of hate speech by the commission.
Instead, those accused had to prove their innocence.
With elimination of Section 13, producing and disseminating hate speech continues to be a Criminal Code violation but police and the courts will adjudicate rather than human rights tribunals.
Storseth drafted his bill in 2011 and enjoyed support from the highest levels in cabinet.
‘Our government believes Section 13 is not an appropriate or effective means for combating hate propaganda,’ Justice Minister Rob Nicholson said in late 2011. ‘We believe the Criminal Code is the best vehicle to prosecute these crimes.’
Last summer, Storseth’s bill cleared the House of Commons in a free vote and, now that it’s through the Senate, it will get royal assent and Section 13 should soon disappear.

FULL ARTICLE ON SUN NEWS AT: http://www.sunnewsnetwork.ca/sunnews/politics/archives/2013/06/20130626-184219.html
And at: http://www.calgarysun.com/2013/06/26/hate-speech-provision-in-human-rights-act-struck-down
——————
Screen Shot 2013-06-27 at 10.05.25 AM
http://blogs.canoe.ca/lilleyspad/general/a-long-batte-but-section-13-is-dead/
Brian Lilley June 26th, 2013
As I write this I am still only being updated by text message on the proceedings in the Senate chamber but I am told Bill C-304 has passed third reading and will receive Royal Assent tonight making it law.
What does this bill do?
There are a number of amendments to the act that help limit abuse but the main one is this:
2. Section 13 of the Act is repealed.
To put it bluntly, the means you can’t take someone through the federal human rights apparatus over hurt feelings via a blog post or a Facebook comment.
Now the bill is passed and will become law but like many acts of Parliament it will not come into force for a year.
Still after a long hard battle to restore free speech in Canada, this is a victory.
Here is the section of the act as it now stands, soon to be just a memory.
13. (1) It is a discriminatory practice for a person or a group of persons acting in concert to communicate telephonically or to cause to be so communicated, repeatedly, in whole or in part by means of the facilities of a telecommunication undertaking within the legislative authority of Parliament, any matter that is likely to expose a person or persons to hatred or contempt by reason of the fact that that person or those persons are identifiable on the basis of a prohibited ground of discrimination.
· Marginal note:Interpretation
(2) For greater certainty, subsection (1) applies in respect of a matter that is communicated by means of a computer or a group of interconnected or related computers, including the Internet, or any similar means of communication, but does not apply in respect of a matter that is communicated in whole or in part by means of the facilities of a broadcasting undertaking.
· Marginal note:Interpretation
(3) For the purposes of this section, no owner or operator of a telecommunication undertaking communicates or causes to be communicated any matter described in subsection (1) by reason only that the facilities of a telecommunication undertaking owned or operated by that person are used by other persons for the transmission of that matter.
SEE FULL ARTICLE AT: http://blogs.canoe.ca/lilleyspad/general/a-long-batte-but-section-13-is-dead/