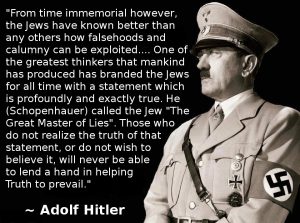 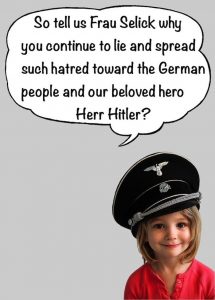 It also must be clearly pointed out that those Jews who were deemed suitable for immigration to Palestine (chosen by the Jews themselves and not the Hitler government) were allowed to leave the country with their possessions and their wealth contrary to the simplistic assertions contained in Selick’s reckless and specious attempt to connect the government of Adolf Hitler with the machinations of what are in fact the Zionist influenced actions of the Harper government and its Zionist supporting cast comprised of the Centre for Israel and Jewish Affairs and the Zionist hate rag the National Post and likely others such as B’nai Brith Canada, all the real bone fide censors existing in Canada today operating clandestinely as 5th columnist traitorous Jewish lobby groups and now, as shown in Selick’s article, involved in further attempts to stop the National Alliance from receiving its legally bequeathed gift from a Canadian supporter.
YoungHitlerAdmirer 700
Selick’s attempt to equate Adolf Hitler and the German nation with all the present subterfuge emanating from the Zionist Jews here in Canada is a cogent example of how the Zionist Jew mindset operates. They distort everything out of proportion; turn the facts 180 degrees upside down in order to force events to match their long list of lies that must be publicized on a regular basis so as to prevent the stupid goy from realizing what is really going on behind the scenes. It’s the Zionist way and Selick is living proof of just how clandestine and contorted and dangerous the Zionist ideology is when it comes to discerning truth from the fiction of lies that political Zionism is predicated upon.
If I might paraphrase the precise words of Selick, who, in her maligning slurs and aspersions aimed at the National Alliance, had the gall to state, ‘As a Jew, I have no sympathy whatsoever with the National Alliance. They sound vile and loathsome to me’ I would unhesitatingly state that as a Gentile Christian I have absolutely no sympathy whatsoever with the Zionist Jews. They not only sound vile and loathsome to me but their actions over the past century and longer have convinced me that they ARE vile and loathsome and that they pose the greatest danger to world peace and harmony that this world has ever experienced.