Sauna Notes: The Mundane Matter of Money: Sweating it out for health and survival by Arthur Topham 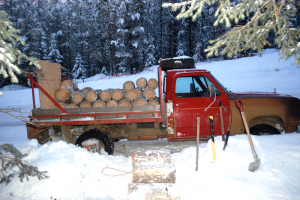 I began construction of our sauna just over thirty years ago in late March of 1983. At the time my wife and I and our three kids we were living in a log cabin that a friend and I had built and being very rustic and owner-built it didn’t have a regular bathroom so we needed some type of bath house.
I had scored the lumber necessary for the building from an old store down in the village of Cottonwood that was being dismantled by a new owner so the price was right (I got it for salvage) and the wood, being mostly rough cut lumber and boards from old growth fir, was perfect for the job and went well with the look of the log cabin too.
SaunaSShot600 copy 2
Actually it became the first of a number of buildings that I designed and put up on the land all of which were based on the gambrel or hip style roof principle.
I decided to put a second story on it rather than wasting the potential storage space and it came out looking rather funky but more than that it was to serve us well in many ways over the ensuing years.
Our roots having been firmly planted in the 60s Hippie generation from that period we’d always planned to return to the land and get out of the city environment and so our little 5-acre ‘small holding’ was just the spot and the way to create a more natural, sustainable and secure lifestyle in order to raise up the kids.
So what are the advantages of having one’s own sauna? Well, after thirty years of experience I can easily say that the first advantage is to one’s overall health (not to mention being one of the best method for getting a close shave!). The sauna is probably the best method of eliminating excess salt and related toxins from the body without the need for extreme physical exertion such as one requires when running or working out in a gym or other similar methods of working out a sweat. Basically all one requires is a water and a fuel source (in our case the sauna is wood fired) and we have an abundance of both of these so maintaining the sauna is very cheap in terms of any outlay of funds.
Inside800
As one can see all that’s required in order to get your hot water is a canner on the top of the wood heater. In our case I was fortunate to find an old wood fired octagonally-shaped heater years ago that someone had discarded in our local refuse site. I managed to get it on the back of my truck and bring it home and set it up in the sauna. It was perfect for the job!
For years now I’ve been going out during the winter months when I had more time and cutting firewood. Since the great infestation of the pine beetle that happened some years ago the woods throughout the central Cariboo have been decimated leaving what must be millions of dead standing pine trees that make excellent firewood for both our home and shop and sauna.
Firewood11.16.05 AM copy
This shot above is typical of my winter wood gathering. I’d go out and fall some dead standing pine as close to the highway as possible and then truck the rounds to the road using my trusty old toboggan and manpower. It cost me a bit of gas for the truck and the chainsaw plus chain oil and a lot of sweat but eventually the wood shed would fill up and we could rest, assured that come hell or high water or -40 or -50 or even -60 degrees Fahrenheit (and we’ve had it drop that low before).
Screen Shot 2013-08-19 at 11.27.45 AM
Winter Security!
Screen Shot 2013-08-19 at 11.25.46 AM copy
Once the rounds of wood are split (again a good way to work up a sweat!) the rest is the luxury that heat, steam and water provides gratis.
The long winter months that we enjoy/endure here in the foothills of the Cariboo Mountains are when the sauna is used the most but as I will shortly explain it is an invaluable tool throughout all seasons. The photo below gives one an idea of what the sauna looks like outside during a cold winter’s evening. Inside of course the environment is exactly the opposite.
Screen Shot 2013-08-19 at 11.40.06 AM
Readers may be wondering by this time what the connection is between the sauna and the unusual title for this edition of Sauna Notes. Well, like all things of late, my lifestyle and my work as a publisher are interrelated in so many ways that it’s impossible to separate them and this includes both the use and value of our sauna during hard times.
As this article is being sent to those on the Radical Press mailing list I needn’t delve into all the finer details concerning my present plight with respect to the ongoing struggle that I am involved in with Canada’s censorship lobby and the Canadian judicial system, both of which are currently attempting to drive me into either drinking or the poor house or worse still, a dungeon. As a result of their terrorization of truth tellers the last seven years of perpetual harassment by the forces of state repression have literally left my dear wife and I chained to a live of poverty due to all the restrictions that prevent me from doing anything else that might add additional sustenance to perpetually challenged larder.
Living on a fixed income that doesn’t cover one’s basic needs such as shelter, fuel, utilities and food is a challenge in itself but when you add to that all the seemingly endless legal shenanigans that one must cope with which require additional expenditure of an amazing amount of time and, yes, money, the equation for survival seems exponential to the point where it sometimes appears overwhelming. 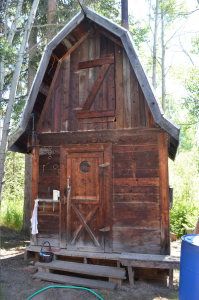 Now here’s the connection. During periods when my pleas for donations become few and far between we still have to eat and pay the normal bills and also feed our chickens and our dogs and cats, all of whom are dependent upon us for their survival as well. In our new house that I built back in 1994 (which replaced the log cabin we once dwelt in) we have a hot water system that is fuelled by a hundred pound propane tank that we must fill approximately once a month. It costs around $90.00 to do that and when we don’t have the money we don’t have hot water running from the tap so, as the saying goes, we then must run for the water instead! Such has been the case for the past three weeks or so. Now this would be very onerous for someone who didn’t have any means whatsoever of producing hot water for all the regular necessities of life including washing clothes, dishes and of course one’s body and that’s where our trusty old sauna suddenly kicks in. While we are (hopefully) temporarily out of propane we can at least still bath and produce hot water for regular domestic use even though it requires (in the case of the house where we also have a wood heater) the necessity of having to physically haul the hot water about in buckets so we can do the normal chores that most people simply take for granted. Thus, as an emergency means of being able to still obtain hot water for our daily needs, the sauna has proven over and over to be a most valuable asset for us.
I’ll conclude with some parting thoughts about this whole issue of having to depend upon others for money. Most folks in the alternative online publishing business are forced to depend upon the gracious beneficence of their readership in order to survive financially. It’s become a way of life for the vast majority of bloggers who are attempting to inform the general public about vital issues and unless one has the financial backing of the larger sites such as DavidIcke.com or Rense.com or others of that category who are able to sell advertising space in order to cover their costs it’s virtually impossible to make money doing what we do. In other circumstances, for example when I would work as a carpenter running such a business, I could easily make sufficient amounts of money to ward off the wolf from my door but in the alternative media that option is basically unavailable as it takes literally 50 to 60 hours a week on the computer to do what I do and I’m still left without the time to get to all the issues and concerns that need to be addressed.
I cannot speak for others but I do know that even after years of hanging out my shingle on the website asking for donations I still sense an uneasiness about having to do it. I feel like some mendicant wandering about with his begging bowl hoping for the means of being able to sustain life and limb so he can continue with his so-called mission in life. That’s the long and the short of it and were it not for those few kind, generous souls who have helped me in a considerable way over the years I would definitely not be doing what I am today. To those kind people who appreciate the value of my work both I and my wife extend our deepest thanks and appreciation.
Screen Shot 2013-08-19 at 11.43.24 AM 2
And so it goes. For all the stress and strain of maintaining Radical Press our little sauna still provides a much needed solace for body, mind and spirit. It’s a perfect way to regain one’s composure and stay healthy. Since building the little hut I’ve probably had less than dozen winter colds over the past thirty years whereas before then I tended to always come down a one or two or more during the winter months. I highly recommend building one if you have the space to do it.
—-
So here’s the clincher. Once again please consider helping me out with a donation if you can. Go to the top of the Home Page at www.radicalpress.com and click on the ‘PLEASE DONATE TO THE RADICAL PRESS FREE SPEECH DEFENSE FUND’ link where you will find all the information necessary to send financial help. Thank you and God bless you.