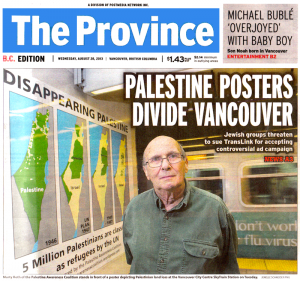 Jewish groups in Vancouver say they are considering suing TransLink for accepting controversial political advertisements showing the ‘disappearance of Palestine due to Israeli occupation over the past 66 years.’
On Tuesday, a group called the Palestine Awareness Coalition announced the launch of 15 bus posters and a large mural in a central Vancouver SkyTrain station, that depict the territory of Palestine steadily shrinking into the state of Israel in a succession of dated maps.
Marty Roth a 79-year-old member of the coalition group behind the ad said they have already won a victory over groups that tried to ‘suppress’ the ads.
‘This will be controversial with a number of traditional Jewish organizations that have tried to suppress the ads,’ Roth claimed. ‘But TransLink has refused to agree with them, because these are educational ads that are well within national advertising guidelines and the Canadian Charter (of Rights and Freedoms).’
Roth said, as a Canadian Jewish man, he believes Israel is unjustly oppressing the people of Palestine and his group wants to educate the Canadian public about the conflict.
But Jewish leaders including Mitchell Gropper, chair of the Jewish Federation of Greater Vancouver, called the ads a provocative attack on Jewish people that will incite hatred. ‘This is a grave concern to our community at large, because the ads make use of the buses unwelcome and unsafe,’ Gropper said, noting that terrorist attacks in Israel often target buses.
‘I don’t think I’ve ever seen ads on our TransLink system that attack a section of our society. If the transit system will be used to attack Israel and the Jewish people, who is next?’
Gropper, a Vancouver lawyer, said his group went to the ‘highest levels’ of TransLink and argued the Palestine ads should be rejected, but they were told TransLink must accept the ads for legal reasons.
The Province sought interviews with TransLink officials but were referred to a prepared statement, which says TransLink sought a ‘third-party legal opinion’ with said the Supreme Court of Canada decided TransLink must run ads such as ‘Disappearing Palestine’ under the Canadian Charter.
Gropper said his group has retained a lawyer with a different opinion, and that suing TransLink is one strategy that is being considered in a response to the ads.
‘TransLink has said the law requires them to publish these ads but that is certainly not the case,’ Gropper said.
The Friends of Simon Wiesenthal Center in Toronto issued a statement saying the group is ‘disturbed to learn about TransLink’s agreement to run historically distorted anti-Israel advertisements.’
‘While Israel and the Palestinian Authority are currently engaged in peace negotiations to resolve their differences and reach a two-state solution, TransLink will be running ads that are provocative and incite hatred and contempt,’ said group president Avi Benlolo.
In 2006 TransLink lost a decision to the B.C. Court of Appeal, after trying to refuse political advertisements from the B.C. Teachers Federation of Students. TransLink’s policy of rejecting partisan ads and campaigns likely to cause offence or controversy was overturned.
In the decision, Madam Justice Prowse wrote that B.C. Transit and TransLink ‘sought to prohibit political advertising precisely because it was political. Their aim was to prevent the appellants from exercising their right to freedom of political expression, although they were content to entertain commercial expression.’
The ad campaign cost $15,000 and will remain in place for four months. The wall mural, which debuted at Vancouver City Centre station on Tuesday, drew curious looks from transit users, with many pulling out smartphones to snap a photo.
One woman, who declined to give her name, stopped to examine the ad. She said, while she wasn’t well-versed in the issue, she believes the ad should fall under the category of free speech.
Mohammed Hamid, 45, was one of the many transit users who stopped to snap a photo on his phone. Hamid is from the Middle East and is familiar with the various aspects of the issue being brought up by the ad.
He doesn’t believe the ad was malicious in anyway, but instead, was glad to see it drawing attention.
[email protected] province.com
twitter.com/scoopercooper
with a file from Stephanie lp