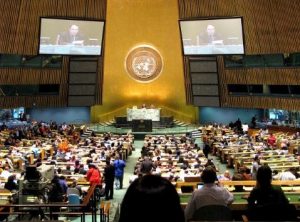 [BRITISH COLUMBIA]: Launched in 1989 and awarded Consultative Status at the United Nations in 1993, IHRAAM serves as an umbrella organization to facilitate and coordinate the efforts of national minorities, indigenous peoples, occupied peoples and unrepresented nations to gain access to international law and its enforcement mechanisms concerning human rights and the right to self-determination.
In 2011, the Inter-American Commission for Human Rights (IACHR) of the Organization of American States (OAS) became engaged with a Lil’wat Petition initiated by Pau Tuc la Cimc (James Louie), a Lil’watmc of the St’át’imc Nation and drafted by IHRAAM, on behalf of Lil’wat mother, Loni Edmonds, who has suffered serial seizure of her six children by the BC Ministry of Children and Family Development. Significantly, the Petition linked Loni’s human rights as a mother with the greater issue of the Lil’wat right to jurisdiction not only over their children and families, but over their lands and resources, as an indigenous nation which has no treaty with Canada. At IACHR request, Canada has responded four times to the IHRAAM Petition and subsequent Observations. A fifth Canadian response is awaited.
In the interim, Petitioners James Louie and Loni Edmonds met with IACHR Commissioner for Women, Tracey Robinson, at the Renaissance Inn in Vancouver on August 9th, 2013, further to her investigation of the situation of native women in British Columbia.
IACHR_021-294×400
Also 2011 marked the beginning of IHRAAM representatives attending the United Nations Permanent Forum on Indigenous Issues (PFII), leading to the submission of interventions in 2011 (Lil’wat Intervention), 2012 (Rights of indigenous peoples to food and food sovereignty; The extent of violence against indigenous women and girls), and 2013 (Canada’s Truth and Reconciliation Commission NOT the model for global adherence). A Report on the 12th session of the PFII is available here.
PFII2013opening-479×355
IHRAAM was also active at the UN in Geneva as it relates to the issues faced by indigenous peoples in Canada, submitting interventions in Human Rights Council’s 18th session (Canadian First Nations Disproportionate Placement in Foster Care: Three Times the Level of Residential School Placements at Their Peak), 19th session (Indigenous Nations in Canada Face Systemically Enforced Non-development), 23rd session (‘Canada’s Treatment of Native Children Shoddy and Suspect’). IHRAAM also facilitated the attendance of Idle No More Founder Sylvia McAdam to address the Human Rights Council in March, 2013.
In 2013, IHRAAM Consultant Kerry (Coast) Henselwood participated in the UN Expert Mechanism on the Rights of Indigenous Peoples (EMRIP). Her intervention is posted here, and the IHRAAM Report on EMRIP’s sixth session is available here.
EMRIP_Wilton_Littlechild_as_chair_of_emrip_6th_session-600×450
In co-publication with Clarity Press, Inc. (Atlanta), IHRAAM will shortly release Kerry Coast’s The Colonial Present: The Rule of Ignorance and the Role of Law in British Columbia. Longtime author and activist Ward Churchill had this to say:
Kerry Coast lays bare the putrid sophistries through which the Canadian state purports to legitimate its genocidal expropriation of the indigenous homelands comprising what is officially known as ‘British Columbia.’ This is history as it should be done.
Natsu Taylor Saito, Professor of International Law, Georgia State University, wrote: ‘This fascinating study provides a template not only for understanding but transforming colonial realities throughout North America.’
the_colonial_present_030913-400×600
Going forward, IHRAAM intends, through webinars, slide shows, publications, speaking engagements and press releases, to take on the following issues:
• From Sovereignty to Municipalization: Canada’s plans to extinguish indigenous peoples’ rights

• Distinguishing ‘Self-determination’ (being policy and rule-makers, budgetary priority setters, resource owners) and: ‘self-government’ (a technical term developed with reference to Canadian legislation, meaning in its application an indigenous self-administration of Canadian policies and laws, overseen by Canadian decision makers and funders)

• Self-Determination as Key to addressing indigenous sub-issues of poverty, murder of native women, destruction of the environment, land and resource theft, criminalization, homelessness
IHRAAM is interested in hearing from indigenous groups, academics and lawyers who are already engaged or wishing to engage in similar investigations, research, documentation and interventions to the UN committees, the Human Rights Council, etc., for possible cooperation. We look forward to and welcome your support.