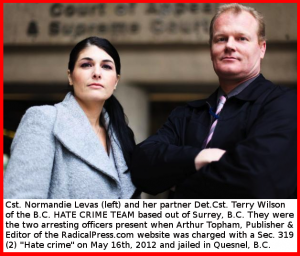 Dear Free Speech Advocates and Radical Press Supporters,
Due to the nature of this particular Legal Update, i.e., it being recent events connected to my Preliminary Inquiry, the necessity arose for editorial commentary throughout the report wherever I felt it was warranted. It also meant that it would be a rather long article as well. The need to present a general overview of my case now that it’s finally reached this stage is the reason for its inordinate length.
January 22nd, 2014 marked the 616th day since my arrest on May 16th, 2012 for the alleged crime of ‘communicating statements, other than in private conversation, [that] willfully promote hatred against an identifiable group, people of the Jewish religion or ethnic origin, contrary to Section 319(2) of the Criminal Code.’ The actual section of the Criminal Code of Canada reads:
Wilful promotion of hatred 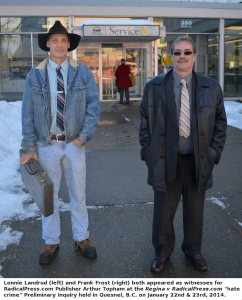