Frank & Helen Speak Out: A Radical Interview with two of B.C.’s most staunch indigenous sovereigntists in their quest for native rights and justice. 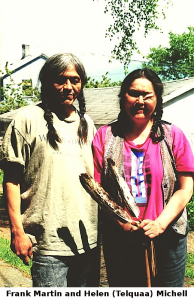 [Editor’s Note: The following interview with Frank Martin and Helen Michell aka Telquaa took place back in June of 2001 and ran in Vol. 3 No. 10 of The Radical, Canada’s Activist Monthly Newspaper. Frank and Helen are still very much active in their ongoing struggles with the State, the Judicial system and the police and it is in their interest and that of public awareness that I am running this interview once again.]
———————
Frank & Helen Speak Out
Eddie John, B.C. Land Treaties, Residential School Abuse, Genocide and Native Justice
By Arthur Topham
Radical Reporter
June, 2001