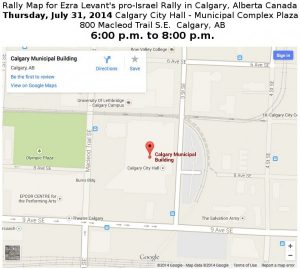 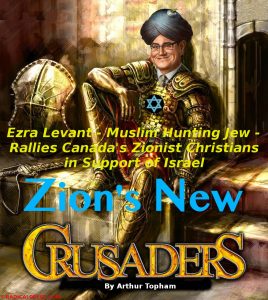 It was just a matter of time before Canada’s Zionist media mouthpiece Ezra Levant reacted to Israel’s rain of hell-fire and brimstone that’s been falling on defenceless Palestinians in Gaza since July 13.

The Jew-controlled media around the world and here at home have been working their butt off ever since the Israeli government decided that it was time for another blood sacrifice to their satanic god, Moloch the Death Eater, doing their utmost to muster support for the murdering, blood-thirsty Zionists while the Internet explodes with outrage, disdain and negative reaction to their demonic deeds.

I’m sure the Zionists across the nation were shocked to see the number of Canadians who, finally fed up with the insanity of the Zionist Jews, took to the streets in great numbers to protest what will likely go down in history as a benchmark event in terms of that point in time where the awareness of what’s truly happening in Palestine is finally sinking in for the majority of decent people across the nation.

Recent events in Calgary, Alberta where a large anti-Israel protest occurred and some rabid pro-Israel Zionist Jews got a thumping for starting trouble, has triggered what Levant is calling his “Calgary for Israel Rally” which is slated to take place in front of Calgary City Hall on Thursday, July 31st at 6 p.m.

Levant has a website erroneously called “Fighting for Freedom with Ezra Levant” where he sends out email to his subscribers. In his latest rally cry for support for poor, beleaguered Israel he writes:

“I live in Toronto now, but as a lifelong Calgarian I was appalled to see a riot by anti-Israel extremists that happened on the steps of City Hall. Worse still, the police did nothing — they weren’t even there. And half a dozen Calgarians were sent to hospital by this Hamas-style violence.

I’m fighting back — peacefully. On Thursday, July 31st at 6:00 p.m., I’m hosting my own rally. It’s partly in support of Israel. But it’s partly for Calgarians to strongly reject this imported Hamas-style violence.

This is Canada — not Gaza.

If you’re in the Calgary area on Thursday, please join us! All of the details are available at CalgaryForIsrael.ca.

P.S. Please spread the word about the CalgaryForIsrael.ca Rally on Twitter and Facebook. This event is in Calgary, but let’s make a national impact — we want peace in our Canadian streets, not riots and violence.”

Now how’s that for chutzpah? Ezra the Muslim Hunter who’s been spreading ongoing hatred toward the Arab people via the Sun News Network and elsewhere for decades is now going to rally all the Christian Zionists that he and his rag tag band of Irgun-inspired criminals have been duping and milking for donations for decades and show Canada and the world just how much our nation STANDS FOR ISRAEL!

Heaven forbid that such an outcome would occur but given the fact that Canada’s Christians have been dumbed down for so long by the Jew-controlled news media; so much so that Christians, whose very Saviour and Lord, Jesus Christ, was murdered by this same gang of Talmudic Rabbinical tyrants two thousand years ago and they still haven’t figure out who the devil to trust, it will be of great interest to see to what degree their decades and centuries of mind-control propaganda will have on them and whether they’ll turn traitors like Harper and the Conservative government and pledge their allegiance to this foreign, apartheid and racist warmongering state of Israel rather than to their own country of birth and residence.

Ezra Levant is a traitor to Canada along with the Jew-controlled news media that daily uses its unwarranted power and influence to turn average Canadians into rabid Zionists and haters of the Arab people of the world. I see it happening all the time and witness otherwise decent, peace-loving Canadians suddenly go brain-dead when the subject of the Jews and the Arabs come up, all because of the daily brainwashing that they’ve received throughout their lives.

Levant facetiously states in his forked-tongue way: “This is Canada — not Gaza” knowing damn well that THE WHOLE WORLD IS NOW GAZA not just Palestine and all because the Zionist Jews have been allowed to build uptheir Big Brother media network of deception and lies into a monopoly and use it to twist the minds of good, honest people who were raised up to believe that their media was independent and free and that it would give them historical truth and not fill their replica heads with prejudicial lies and and their hearts with hatred.

Canadians and freedom-loving, peace-loving people around the world are horrified at what Israel has done to the people and the infrastructure of Gaza and they have not only a right but a duty to be outraged and to express their outrage in the most appropriate manner possible.

Given this fact I hope that as many anti-Zionist, anti-Israel people as possible will gather in Calgary on July 31st and counter this move on the part of the traitorous Jewish lobbyists and their media maniacs like Ezra Levant to shift Canadians away from true Christian values and decent morals and ethics that have served as our guiding principles for centuries, long before our governments were infiltrated by the Jewish lobbyists like B’nai Brith Canada, the former Canadian Jewish Congress and the Canadian Council for Israel and Jewish Advocacy who have always been pro-Zionist and Israel Firsters.

It’s time for Canadians to rise up and unite in defence of freedom and democracy and in defence of the Palestinians who are being genocided right before out eyes while the likes of Zionist Jew Ezra Levant and his Zionist media monopoly lie and deceive us with their deadly deceptive propaganda and hate.