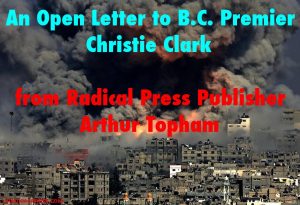 I cannot adequately convey my deep sense of disappointment and outrage over the fact that you have appeared before B.C.’s Zionist Jew community in Vancouver and despoiled and sullied the good name of the province of British Columbia and all of its inhabitants by speaking to and telling the crowd of complicit Zionist war criminals within its midst that British Columbians support the bloody, genocidal actions of the state of Israel against the defenceless people of Gaza, Palestine.

By your own actions you are telling the world, not just B.C., that all the citizens of this great province support the ongoing slaughter of children and women and men in Gaza, and in doing so you not only are betraying the trust of British Columbians but committing an act of treason against your country.

The state of Israel is the most belligerent, blood-thirsty, zealously racist, rogue, apartheid nation on the face of the planet; one that’s been illegally and irrationally stealing territory from the rightful owners of the land since its inception in 1948, using murder and genocide and terror of the defenceless Palestinian people as its primary aim, all with the intention of driving the Palestinians out of their own territory so that Israel can gain control of the land and all its resources.

Israel has herded the Palestinians into concentration camps like Gaza and then imposed outrageously unjust restrictions upon their freedoms so as to make them dependent upon the Israeli state for all basic necessities like water, food, medical supplies and education.

As this unjustifiable carnage and slaughter continues and the world’s media, controlled by the Zionist Jews, continues to pump out its lies and anti-Palestinian propaganda on a 24/7 basis, people around the world are rising up to protest the crimes of Israel against their helpless victims, finally realizing from all the blatant, astounding destruction and death, that this Jews-only, supremacist state is not only a threat to peace in the Middle East but the number one stumbling block to peace around the world.

As a citizen of the province of B.C. from before the time that you were born I strongly object to the fact that you’ve assumed the right to speak on my behalf and attempted to tell the Jewish Zionist community of Vancouver that all of British Columbia is in full support of Israel’s illegal, immoral, illogical and ill-conceived actions toward the people of Gaza. Nothing could be further from the truth. Your complicity in this matter is beyond the pale of anything resembling a humanitarian, statesman-like approach to a conflict that’s been the bane of civilized people for the past sixty-six years of Israel’s existence as an independent member of the world’s nations.

Your callous and crude display of feigned allegiance to the racist, murderous actions of Israel, all based upon the lie that ‘Israel has the right to defend itself’ by slaughtering innocent men, women and children, will go down in history as yet one more example of how the mighty have fallen for the lies of World Jewry’s insidious, ongoing propaganda.

I cannot tell you just how ashamed I am of you and your government for having taken this political stance in your unabashed support for war crimes committed by the state of Israel. As head of B.C.’s elected government you’ve added your name and the name of the B.C. Liberal Party to a growing list of undisguised, shameless traitors and sycophants who, like Prime Minister Stephen Harper, have dragged Canada’s former reputation as a peace-loving nation down into the gore and blood and rubble and terror that is Gaza today.

Were you a true Christian I would advise you to fall down on your knees and pray to God to forgive you for your gross stupidity and lack of compassion. Even as a single mother who presumably loves her child, the notion that you can stand up in public and brazenly support a tribe of racist, self-serving malcontents who are sacrificing and slaughtering little children by the hundreds, is beyond comprehension for anyone, Christian or otherwise, who has and who loves their own children and grandchildren.

It begs the question Christie Clark: for what price have you sold your soul to this Machiavellian agenda that political Zionism has created around the world? We all, by now, realize the inordinate influence of the Jewish lobby and the ‘power of their purse’ as well as the absolute media control that they have here in Canada and around the globe, all of which only makes them that much more delusional, believing in their own rabbinically induced phantasy that they are somehow, ‘God’s chosen people’ destined to become the heirs to not only all of Palestine but to the planet itself. They obviously have chosen of their own accord to assume such a mantle of malicious intent and ill-will and mask it behind their endless lies and media cover ups which you, in your servile display of flattery and obsequiousness before the crowd assembled at the Temple Sholom synagogue in Vancouver have only helped to exacerbate.

Your pretentiousness and arrogance in thinking that by aligning your party and the province with this dark, sinister, demonic and evil presence you will somehow gain any positive benefits for B.C. or your party is both ill-conceived and erroneous. You’ve only brought shame and disgrace to our province and shown the world that you and your Liberal party are nothing more than complicit, guilty war criminals deserving of nothing less than to be removed from office and banished from Canada forever.

Arthur Topham
Pub/Ed
RadicalPress.com
Canada’s Radical News Network
‘Digging to the root of the issues since 1998’