The Book of Gareth: Why Persians Should Never Sleep With Jewish Whores by Trevor LaBonte 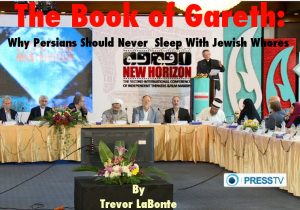 Whatsupic — ‘A nation can survive its fools, and even the ambitious. But it cannot survive treason from within. An enemy at the gates is less formidable, for he is known and carries his banner openly. But the traitor moves amongst those within the gate freely, his sly whispers rustling through all the alleys, heard in the very halls of government itself. For the traitor appears not a traitor; he speaks in accents familiar to his victims, and he wears their face and their arguments, he appeals to the baseness that lies deep in the hearts of all men. He rots the soul of a nation, he works secretly and unknown in the night to undermine the pillars of the city, he infects the body politic so that it can no longer resist. A murderer is less to fear.’
Marcus Tullius Cicero Roman philosopher, politician, lawyer, orator, political theorist, consul and constitutionalist.
Iran New Horizon Conference 2014
A few curious events regarding the New Horizons conspiracy conference in Tehran in early October 2014 provide us with a crucial case study in what ails the anti-Zionist truth movement and how the situation needs to be improved.
For those in need of debriefing, here is the article based on emails that journalist Gareth Porter leaked to the Zionist-infested internet news media company ‘Buzz Feed.’
(Here is my original op-ed about it, published on Oct 9, 2014)
Jewish ‘Anti-war’ leftist journalist Gareth Porter managed to pull off a major double-cross against the government of Iran, which happens to be fighting to continue to exist amid a sea of Zionist-manufactured regional turmoil. Porter received a valuable assist from the inside by conference organizer Reza Montazami, who refrained from commenting in the aftermath of Porter leaking his personal emails to Buzz Feed in the interests of libeling and smearing the conference organizer and falsely implicating the government of Iran into the phony scandal.
The episode is a textbook example of why it is crucial to pay strict attention to a number of simple key factors in determining who should be allowed inside the Islamic Republic, and who should be considered an enemy to be barred at the door.
The leaked emails reveal that, beginning on Aug 15, 2014, Porter first demanded, as a prerequisite to his participation, as a prerequisite to his participation that respected author and political commentator, Mark Glenn of Press TV and The Ugly Truth, be dis-invited from the conference, a conference which was important to Iran’s safety and national interests.
Parenthetically, Mark Glenn and USS Liberty survivor Philip F. Tourney happened to have co-authored a revealing book together, which reveals all the details of Israel’s treacherous June 8, 1967 false flag attack against America, which was designed to frame Egypt, presumably so the Israeli government could trick America into entering the ‘Six Day War’ for Israel’s slated expansion, the establishment of ‘Greater Israel,’ and a Jewish one-world government. The book clearly illustrates how Zionist interests have an astonishing amount of control over America, with subversive Zionist elements in America conspiring with Israel and even trying to sink the USS Liberty together, and collaborating on the sloppy cover-up when the mission had to be aborted prior to completion. Even though Israel was caught red-handed perpetrating the unspeakably treacherous attack against its supposed ally, the story has yet to break to the public at large, thanks to the power of historical concealment. It is starkly reminiscent of 9/11 on multiple levels, but that is another story.

Porter also, over several emails in the exchange, nosily prodded Montazami for a list of all the other names of the would-be conference participants, and what all of their topics of address would be. When Montazami neglected to answer the questions sufficiently, Porter asked again.
Montazami quickly and inexplicably capitulated to Porter’s demands, offering as his rationale, ‘We don’t invite him whether you come or not. It means that is vrery [sic] critical point for us. if not, what is the different between us and Takfirist. You know what means takfir. May you look at dicionary [sic], and you will find that it makes no differnt[sic] whether you are an American scholar or Libian [sic] primitive, While you hate other, you are takfirist just like Daesh.’
It’s an interesting comparison, given that Glenn is not part of a known force of Zionist-backed foreign mercenaries posing as rebels in a fake civil war, nor has he played soccer with any decapitated heads or cooked up any human livers on his Webber grill. I do occasionally hear that his wife makes good spaghetti sauce, though.
For the record, Glenn’s ‘problematic’ observations about Judaism’s core being an ideology of chosen-ness rather than providing a moral and ethical code which is universal and fair to all people and not just Jews, are simple statements of basic fact and are not based in hatred, bigotry, or prejudice.
Contemporary essentialist philosopher and former Israeli/ former Jew Gilad Atzmon has written on the subject of Jewish identity politics extensively, revealing the same facts which in turn prove Porter’s tit-for-tat equation between Judaism and Islam (reprinted further down) to be a classic example of a logical fallacy.
Yet, it was successful as an appeal to Montazami’s apparently faulty understanding of his own religious faith. Porter said to Montazami, ‘I’m sorry to delay my acceptance of the invitation in this way, but I hope you will understand the difficulty that Mr. Glenn’s participation presents. I would have the same reaction, of course, to the participation in a conference by someone who espoused the view that Islam is a faith that ‘bring [sic] nothing but sickness and death’. I’m sure you have the same reaction.’
Porter failed to produce one example of anything Glenn has said which is not empirically correct, instead making the plea, ‘I have only one problem at this point. One of the people who has been invited to speak at the conference, Mark Glenn, is someone about whom IPIS should be extremely wary. He is notorious for his hatred of Judaism and Jews, which needless to say, IPIS would certainly not want to be associated with.’
Charging someone with being ‘anti-Semitic’ is unfair. It vaguely alleges that there is hatred of Jews based on racial reasons, and makes no reference to the tribalist ideology around which Jewish culture revolves. Opposing a racist/supremacist ideology does not make one a racist.
This passage from the Old Testament summarizes Judaism:
‘When the LORD your God brings you into the land you are to possess and casts out the many peoples living there, you shall then slaughter them all and utterly destroy them…You shall make no agreements with them nor show them any mercy. You shall destroy their altars, break down their images, cut down their groves and burn their graven images with fire. For you are a holy people unto the LORD thy God and He has chosen you to be a special people above all others upon the face of the earth…’
Book of Deuteronomy, 7:1-8

Porter is a hypocrite for lashing out Glenn but taking no issue with the concept that the Earth and all its life forms are the property of the Jews.
When Porter got back to the US, he turned around and attacked Iran itself, the country he purports to be defending against Israel’s ‘nuclear threat’ lies. In an act of sheer deceit and betrayal to the Islamic Republic of Iran, Porter leaked the private emails, which dated back months, to the heavily Jewish-staffed Zionist media outlet ‘Buzz Feed’ to falsely implicate the government of Iran in participating in and helping to organize what was then insultingly reported as an official conference of ‘9/11 truthers, Holocaust deniers, and anti-Semites,’ with Porter saying he ‘regretted attending.’ Porter’s report conflicts with Montazami’s clear and unambiguous statement that IPIS, Iran’s Foreign Ministry think-tank, was not involved with organizing the conference, and therefore the government of Iran had nothing to do with the conference. He managed to paint a non-governmental conference of responsible adults discussing real Zionist crimes and deception…as a scandalous ‘anti-Semitic’ conference done with the government of Iran’s blessings and active participation. Yet, Porter seems to know a lot about ‘Manufactured Crisis,’ which, ironically, is the title of his book about the Israeli MOSSAD’s plot to trick the US into attacking Iran based on Israel’s phony stories about Iran’s peaceful nuclear energy program.
Porter mentioned in the interview that a nonprofit organization called ‘Catalytic Diplomacy’ paid for his travel to Iran. This statement regarding the conference episode to Buzz Feed by the Catalytic Diplomacy’s founder, Jeremy Stone, reveals Stone’s contempt for the truth movement, as well as his Zionistic bigotry against Middle Easterners and his sympathies with the Jewish Israeli imperialist project: ‘It is sad, but definitely true, that the Middle East is full of crazies, of which the Holocaust deniers and the 9/11 truthers are, certainly, among the sickest…But in our half-century of efforts to prevent war, terrorism and genocide, and forestall the collapse of civilization, it is not feasible to avoid attending Middle East conferences that might, in the end, be attended by various nuts in varying proportions. In particular, anti-semitism [sic] is endemic in the Middle East and rising.’

Jeremy Stone is a former head of the Federation of American Scientists and now leads Catalytic Diplomacy
So the Sayan returned the favor of being invited to the conference by making numerous censorious demands, trying to do as much damage as possible to Mark Glenn’s good reputation, lying about the government of Iran, and trying to tar as many people as possible as ‘anti-Semites,’ ‘conspiracy theorists,’ ‘crazies,’ and ‘Holocaust deniers,’ reaching potentially into the highest eschelons of the Iranian government. Only two things appear to have been forgotten, which was to call some of the conference participants ‘Nazis’ and maybe call Iran’s Supreme Leader ‘a new Hitler’ or something like that. But maybe that is coming in the next libelous article featuring Porter, Benjamin, Weir, Escobar, and Co. in Buzz Feed.